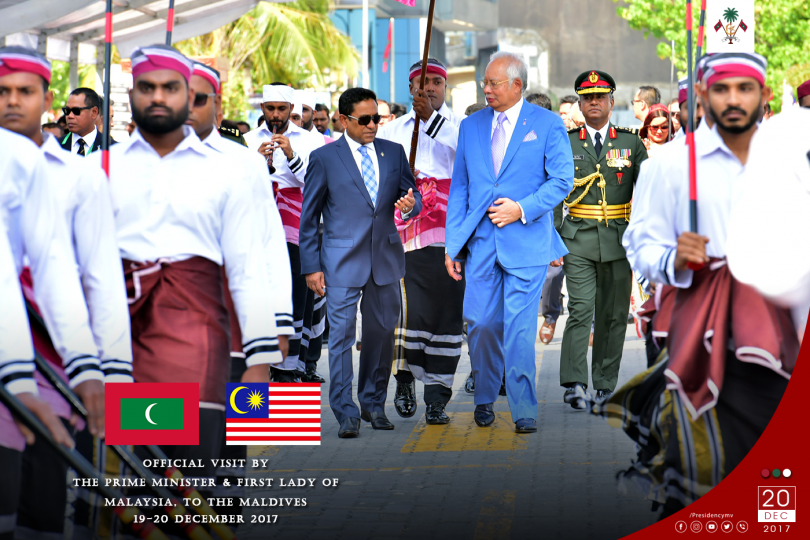 2. The Meeting between President Yameen and Prime Minister Najib Razak was held on 20 December 2017. The two leaders had an in-depth exchange of views on bilateral, regional and international issues of mutual interest in a sincere and friendly atmosphere and reached broad consensus.

3. The two leaders reaffirmed the strong bonds of friendship and cooperation between the two countries and expressed satisfaction over the progress of the bilateral cooperation programme. They stressed the significance and need to increase exchanges between the two countries at all levels and expressed their strong and unwavering commitment to propel the relationship to a more mutually beneficial strategic partnership.

6. As two peace loving Islamic nations, the two leaders agreed to increase their collaborative efforts to strengthen the solidarity of the Muslim Ummah and promote the true values of Islam internationally. Particularly, they exchanged views on the situation in Palestine and the situation in the Rakhine State, Myanmar involving Rohingya Muslims, and agreed to collaborate more closely on these issues.

7. Reviewing the economic cooperation programme, President Yameen thanked Prime Minister Najib Razak for the invaluable contributions extended by Malaysia in the socio-economic development of the Maldives. The two leaders acknowledged the potential for expansion of economic ties through closer cooperation and agreed to set up an appropriate mechanism that will promote business, trade and investment cooperation as well as enhance collaboration between private sector operators.
8. The Maldives and Malaysia being two well-known tourism destinations in the world, the two leaders discussed the potential for win-win cooperation in the area of tourism and hospitality and agreed to enhance exchanges in the tourism sector, especially in capacity building.

9. Youth development being a key priority area of the Government of Maldives, President Yameen appreciated the assistance from the Malaysian Government to enhance youth development in the Maldives. Both leaders underscored the importance of enhancing the youth exchange programme and welcomed the continued progress towards the early conclusion of an MoU on Cooperation of Youth Development and Sports between the two countries.

10. In the area of education and technical cooperation, President Yameen thanked Prime Minister Najib Razak for the important role Malaysia is playing in the human resources development of the Maldives. Malaysia is currently home to a large number of Maldivian students. The two leaders expressed satisfaction that the MoU on Cooperation in the Field of Higher Education will facilitate greater cooperation in this regard.

11. In the field of health, Prime Minister Najib Razak congratulated President Yameen for the remarkable achievements made by the Maldives over the years. The two leaders agreed to cooperate closely in this field and expressed satisfaction that the signing of the MoU on Cooperation in the Field of Health will pave the way for capacity building in the health sector of the Maldives and boost cooperation between the two countries.

12. The two leaders discussed international and regional issues of mutual interest such as climate change, sustainable development, violent extremism and radicalization and agreed to enhance cooperation in the international fora, especially at the United Nations.

13. Recognising climate change as the biggest threat to development, both leaders underscored the importance of implementing the Paris Agreement and agreed to work closely to implement the commitments undertaken in Paris in 2015.

14. Prime Minister Najib Razak thanked President Yameen for the commitment and leadership of the Maldives as the Chair of the Alliance of Small Island States (AOSIS) on climate change and issues facing small states.

15. The two leaders unequivocally reaffirmed their commitment to the fight against terrorism and expressed their resolve to redouble their joint efforts to combat the menace of terrorism in all forms and manifestations.

16. Both leaders expressed their shared belief in moderation as an important value and approach to countering violent extremism and promoting dialogue, mutual respect and understanding. In this regard, Prime Minister Najib Razak also expressed his appreciation to President Yameen for Maldives’ co-sponsorship and support for the resolution “Moderation” tabled by Malaysia, which was recently adopted during the Seventy-second Session of the United Nations General Assembly.

18. Prime Minister Najib Razak conveyed his gratitude and appreciation to President Yameen for the warm welcome and generous hospitality extended to him and the members of his delegation by the Government and people of the Maldives.