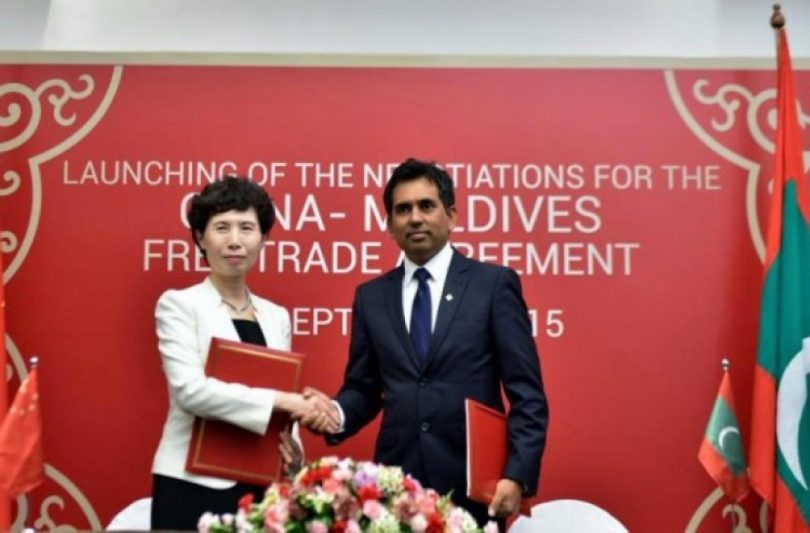 The announcement of a free trade agreement between the Maldives and China is another sign of Beijing’s success in its outreach in South Asia. After its push for maritime linkages across the Indian Ocean, including naval exercises and port projects, and for the enhancement of regional connectivity through the Belt and Road Initiative, China seems to be ready to ramp up business ties across South Asia. China already has an FTA with Pakistan and is exploring or negotiating FTAs with Bangladesh, Sri Lanka and Nepal. The negotiations with the Maldives took about three years and were completed in September this year; it was ratified overnight by Parliament in Male. The agreement is expected to be signed this week, during President Abdulla Yameen’s first state visit to China. While New Delhi has made no public statement, it has reportedly made its displeasure known, particularly on the speed and stealth with which the negotiations were completed. However, apart from the actual FTA, the rapid growth in China-Maldives ties has not been hidden from anyone. This is driven by massive infrastructure projects, including the development of Hulhule island and the “Friendship” bridge connecting it to Male. Apart from investments of $1 billion, Chinese companies are exploring tourism prospects in the Maldives, leases to resort islands, and reclamation projects.

While this can be seen as a natural outcome of the Maldives’ development plans, there are reasons for India to worry. The Yameen government also said this week that it is not satisfied with the working of the FTA with India. That statement, made by the Fisheries Minister at a press conference in Colombo, is likely to be discussed in detail between New Delhi and Male. Second, the manner in which the FTA was rushed through Parliament in a matter of minutes at midnight, with opposition members complaining they had not received enough notice, suggests a haste that would naturally worry India. The move also shows that the Yameen government is not inclined to pay much heed to international concerns over the internal unrest. One reason for Mr Yameen keeping India out of the loop on the FTA talks may be New Delhi’s new policy of engaging with the Maldivian opposition, especially former President Mohammad Nasheed. The biggest worry for India is that the FTA will draw the Maldives more closely into China’s security net. Although Mr. Yameen has categorically stated that the Maldives will remain a “demilitarized zone”, there are concerns that the PLA-Navy might be looking for a military base in the islands linked to projects in Djibouti, Gwadar and Hambantota. The docking of three Chinese naval warships in Male harbour in August, the first such “goodwill visit”, was significant in this respect. China’s growing presence in the Indian Ocean presents a challenge to India as it looks to define its place in the U.S.-led “Indo-Pacific” realignment.