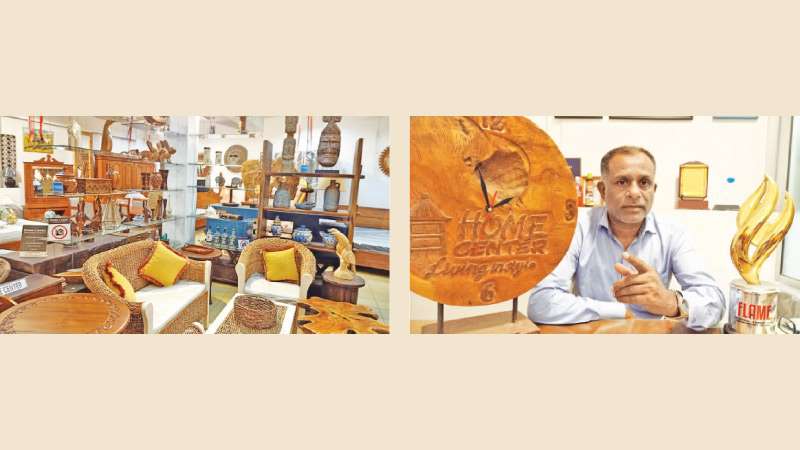 Home Centre Nawala Road, Nugegoda and Kohuwela will be recommencing their furniture exports to the Maldives and the region soon.

Home Centre, Chairman, N.M.M. Naheem said that due to the Corona Pandemic their exports mainly to leading global hotel chains in the Maldives and Australia were temporarily halted and would resume from November as orders are flowing in once again. He said that the Home Center was started six years ago mainly to fill a ‘demand vacuum’ for quality uncommon designed furniture for mainly boutique hotels, estate bungalows, function halls and selected homes.

“This segment prefers to have uncommon furniture and we rose to this need to handpick and import them from Indonesia,” he said. Since people also wanted light fittings, Home Centre started importing them, selecting uncommon items to give uniqueness to their customers. “Today we stock the latest furniture models that match houses, hotels and offices. This handmade furniture was an instant success and most of the leading hotels, especially boutique hotels use my furniture,” Naheem said.

He further said, “To meet the additional demand we opened our second store at Dutugamunu Street, Kohuwela last year. Before the pandemic, I travelled four times a year to Indonesia to meet my suppliers. While there is a scarcity and red tape to obtain wood for furniture in Sri Lanka, wood is freely available in Indonesia. This is due to their planned re-planting program which has also made Indonesia one of the largest natural furniture suppliers to the world.”

He said that it was unfortunate to note that the tourism promotion to and for Indonesia has not been properly executed thus shutting down a huge potential market. “The former Rajapaksa government saw the opportunity and launched Mihin Air to Jakarta mainly to target a large number of Buddhist pilgrims.”

Home Center, Nugegoda, which has won the hearts of the nation by selling over fashionable furniture, has been successful in winning an Excellence Award at the Flame Awards 2016, organized by the Western Provincial Council to honour entrepreneurs.

“The corona pandemic has also dealt a severe blow to local artistes and to give them a market place and means of income we have also decided to display and sell some of their paintings at our two stores,” Naheem concluded.