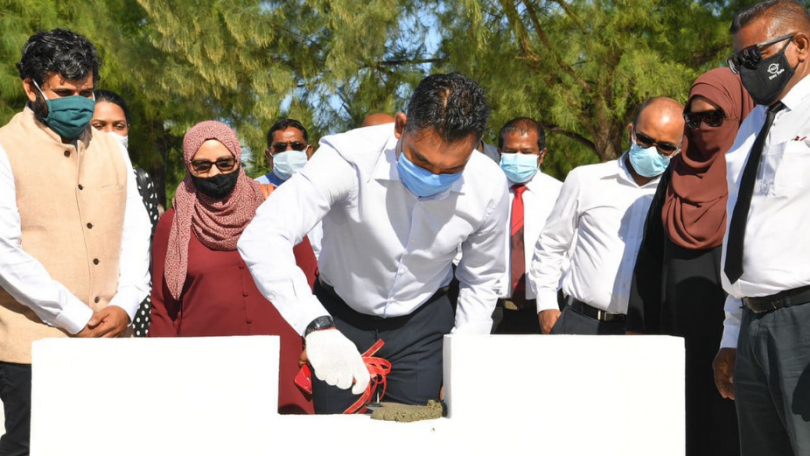 The groundbreaking ceremony of the Drug Detoxification and Community Rehabilitation Centre in Hulhumeedhoo Ward, Addu City has been held yesterday.

At the ceremony, Vice President Faisal Naseem has emphasised the value placed by President Ibrahim Mohamed Solih’s administration to increase the youth’s contribution towards national development, by giving them positive direction and providing them with opportunities.

Speaking about the prevalence of illicit drug use among youth, the Vice President described it as one of the top predicaments facing the nation’s youth today. He characterised drug abuse as a menace that severely compromises people’s well-being and productivity. It also has a substantial negative impact on the development work done by the Government, he said.

The Vice President then spoke about the Administration’s plan to rescue those youths who have become victim to drug abuse, to treat them and return them to the community as successful individuals capable of contributing to national development. In this vein, he said that treating drug-involved offenders provides a unique opportunity to decrease substance abuse and reduce criminal behaviour.

Once established, the Drug Detoxification and Community Rehabilitation Centre will accentuate the Administration’s efforts towards shaping the role and increasing the contribution of youth to national development.

Minister of Health, Ahmed Naseem, Minister of Gender, Family and Social Services, Aishath Mohamed Didi, Minister of Finance, Ahmed Ameer, and Minister at the President’s Office, Ali Shiyam, were in attendance at the function this evening.