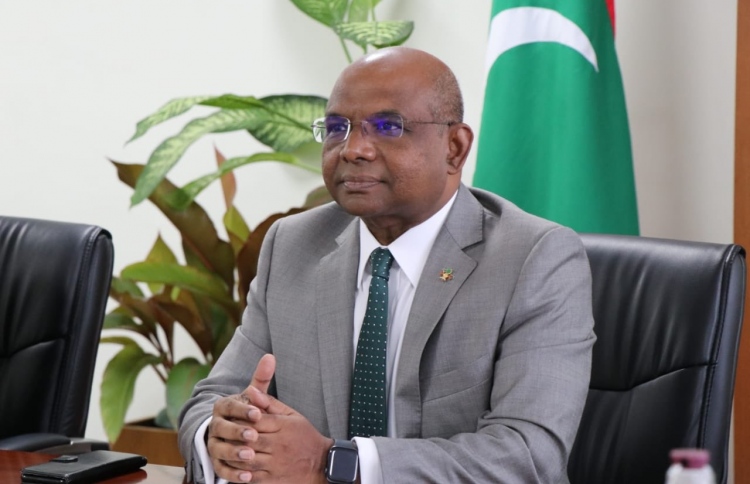 Minister of Foreign Affairs Abdulla Shahid, on Saturday, spoke about Maldives’ journey in the United Nations, as the intergovernmental organisation celebrated its 75th anniversary.

Speaking on the occasion of UN’s diamond jubilee, Shahid declared that Maldives’ “journey in the UN has shown that while size may constitute a perennial consideration for small states, we have an equal voice to contribute to the international community”.

“Our track record at the UN is a testament that small states are not only valuable partners, but part of the solution to address the threats facing our world, especially the new and emerging threats of the 21st century”, he added.

“For 75 years, the UN has stood as the universal body for globalization and multilateralism – a beacon that inspires and drives global solidarity”, Shahid said reiterating his faith in the organisation.

“Despite the challenges globally, the UN ensures that we are connected, and with mutual respect and understanding, together we can achieve the future we want”.

As the globe, and its economy, struggles towards healing from COVID-19, the island nation’s minister described 2020 as a reminder of the UN’s significance due to the ongoing unprecedented global health crisis created.

As Shahid made the statement about Maldives’ importance in the international arena, the US Secretary of State Mike Pompeo is scheduled to pay an official visit to the Maldives on October 28, nearly three decades after the last official visit from a US government official in 1992.

During the visit to the region, Mike Pompeo’s delegation will also visit other key countries of the Indo-Pacific region including India, Sri Lanka and Indonesia.

Recently, Maldives signed the “ Framework for US Department of Defense-Maldives Ministry of Defence Defense and Security Relationship” deal with US which is speculated to challenge China’s growing influence in the Indian Ocean.

The deal was signed with the support of neighbouring India, the island nation’s closest bilateral partner since President Ibrahim Mohamed Solih’s administration repaired the hindered relations.

Speaker of Parliament and former President Mohamed Nasheed has repeatedly called the Chinese loans a “debt-trap”, which Chinese Ambassador to Maldives Zhang Lizhong has repeatedly denied, insisting that “it conforms to international practice and will lift the economic and trade ties to new level”.

Now a partner of the UN for 55 years, Maldives was one of the first small states to join the UN in 1965, soon after its independence from the British.