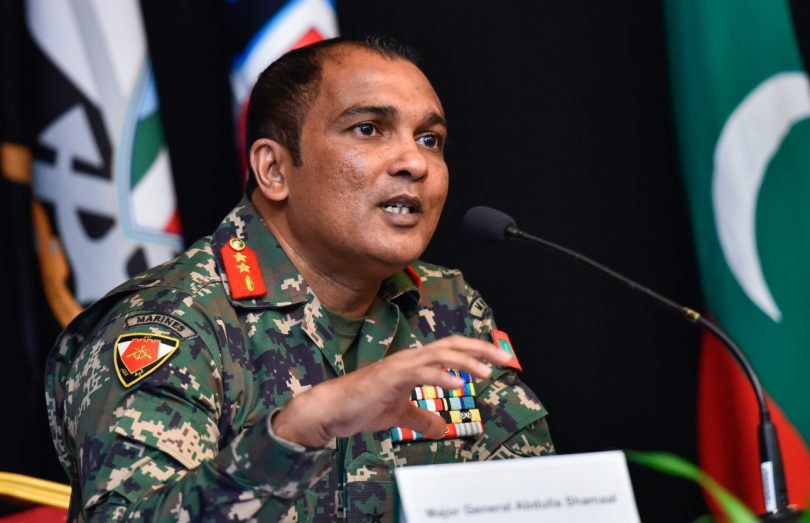 The Chief of Defence Force Major General Abdulla Shamal stated on Tuesday that the actions of the expatriate workers in the Maldives are equivalent to that of foreigners taking over the nation.

Speaking at the Parliamentary Committee on National Security and Foreign Relations, Shamal stated that 250,000 expatriates live amongst the Maldivian population of 500,000 locals.

Out of these, he stated that 179,954 were registered while the remaining 66,000 were undocumented.

According to Shamal the large expat population in the Maldives has threatened the sovereignty of the state.

“This is not the day and age of taking over countries with weapons. However, a lot of people have entered our country from one of our neighbouring countries because our borders were open. What we are seeing today from these expats is what we would see if a foreign power colonised a country”, Shamal said.

“They have penetrated our society in every area. This includes establishing marital relationships with Maldivians amongst others. They are actively involved in crime as well. And finally, we see the ones who attacked the police the other day. That is why this becomes an issue to national security”, he clarified.

Shamal further expressed concerns over the difficulty to implement the Maldivian legislation on most migrant workers.

In addition, he highlighted the danger of the expat population in the Maldives soaring over the population of youth.

Noting that the issue of expatriate workers was raised multiple times in the past, he stated that no adequate measures have been taken as of yet. Therefore, he stressed on the importance of all state institutions to collaborate on solving the matter.

“Discussions have taken place in the National Security Council regarding this issue as well. For example, how we can take steps against the ‘illegal people’ [in the expat population], how we can send them back”, he stated.

“Even popular Maldivian companies employ ‘illegal people’. Ages have passed. This is also an issue. I think enough labourers to complete major projects for the span of the next six years have been brought in to the Maldives. Therefore, we discussed regulating them by taking them to a place where they can be employed, [and] registering them and transferring them to companies”.

During Sunday’s Committee session, Minister of Defence Mariya Ahmed Didi declared that unpaid wages were not the root cause of the multiple demonstrations recently staged by expatriate workers across the Maldives.

She alleged that hidden factions were behind creating unrest, but did not reveal further details on the matter.

Various expat-led protests have recently taken place amid renewed concerns from rights groups as well as the general public, over the continued exploitation of expatriate workers in the Maldives.

A total of 41 arrests were made at the violent protest held on July 13, by expatriates employed at Island Expert Pvt Ltd in reclaimed suburb Hulhumale’, over unpaid wages and inhumane treatment.

Both of these protests resulted in property damage in addition to attacks on police officers, and migrant workers detained in these protests are currently under investigation.