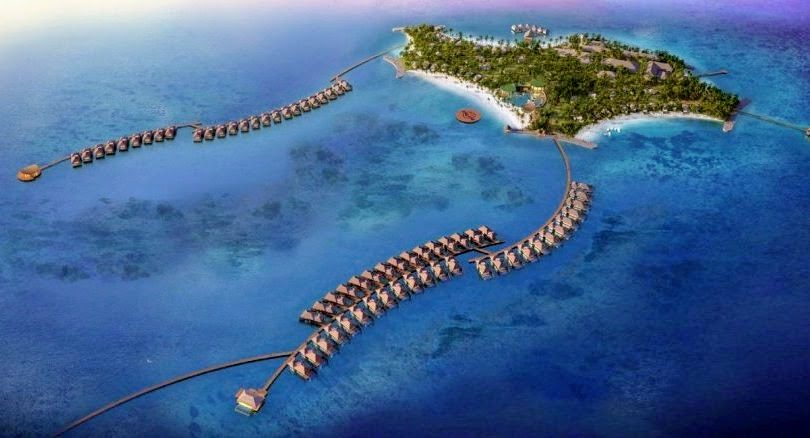 The original Dhivehi article was published on Mihaaru.com website on 31st July 2017.

There are no trees or any building visible here. This used to be just a huge lagoon. However, now, after the land reclamation work has begun, it is starting to shape into an island. This location is set to become a world-class tourism destination.

This multi-million dollar ‘Emboodhoo Lagoon’ mega-project, based on integrated leisure and über-modern facilities, costing millions of dollars is carried through in several phases. The project is managed by Thailand’s Singha Estate Plc. They are a wealthy and a leading property development company.

Singha Estate company believes that this project will revolutionize Maldives’ tourism. It will create exuberance and redefine the whole meaning of holidaying in the Maldives.

This ‘Emboodhoo Lagoon’ integrated leisure and recreational destination mega-project is unprecedented in the Maldives. Once in operation, Maldives is expected to become ideal to the global market also as a family vacation destination. 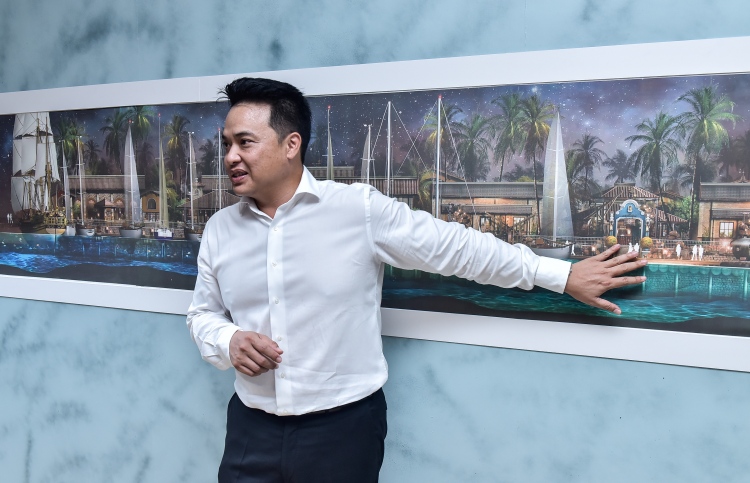 The main goal of this project is to make this a one-stop world destination in the Maldives. Being located in the Indian Ocean, it is ideal for the big spenders in the Asian, European and from the Middle Eastern market and for the transit-ers through Maldives.

‘Since Maldives became famous for a honeymoon destination, to this date, the top class and low class of the tourist segment has not been seen in the Maldives. In the world tourism market the middle and top class tourists has been gradually increasing, the goal of the project is to deliver for these two classes of tourists,’ was stated in a Press Release published by Singha Estate company.

The project that is being conducted in this massive lagoon is to develop 9 islands that serves to different lifestyle concepts. These lifestyle concepts are designed for guests from around the world, to relax, experience countless indulgences, that accommodates to all aspects of a vacation, the company revealed.

Singha Estate company’s Chairman Chutinant Bhirombhakdi, who graced the inauguration ceremony while speaking to Mihaaru newspaper said on the developments of the 3 islands in the first phase of the Emboodhoo Lagoon project, 311.5 million dollar (4.8 billion Maldivian Rufiyaa) will be spent.

‘In this (first phase), will be based on a township concept, a novel idea for the Maldives, where you will find everything in one place: from international standard food items and beverage services, retail outlets, entertainment and recreational centers, leisure lifestyle will also be available,’ he said. 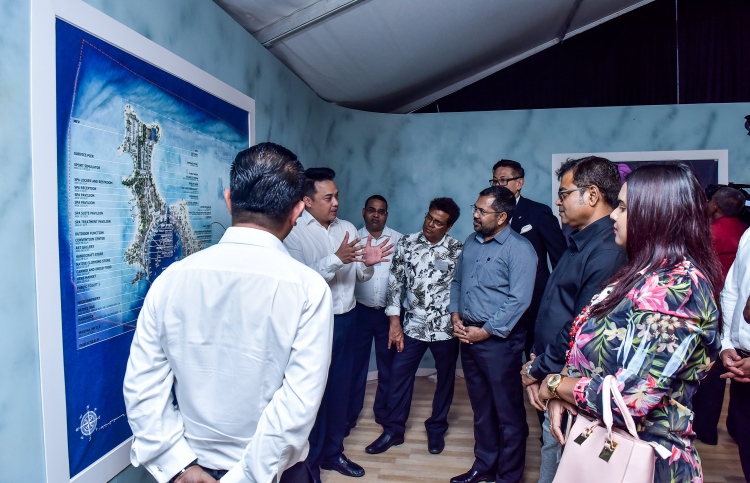 Singha Estate company said the main center of the township will be a yacht marina, especially for the top class vessels. There will be 50 floating docks (jetty). That marina will be managed by British company Camper & Nicholsons, a global leader and expert in yacht and marina management.

After teaming up with Café Del Mar, the world’s popular beach club operator whose iconic facilities are located throughout famous tourist beach destinations around the world, with the arrival of Cafe Del Mar Beach Club in the Maldives, it will become the largest lifestyle beach club ever built in the Indian Ocean.

‘While relaxing by the beach and the pool, appetizing food and fresh beverages will be available from the Beach Club. Beach Front venue will also be ideal to host various events,’ Singha Estate company informed.

In the township famous for Thai flavours, 33 Est restaurants and 20 varied cuisine outlets will be established. 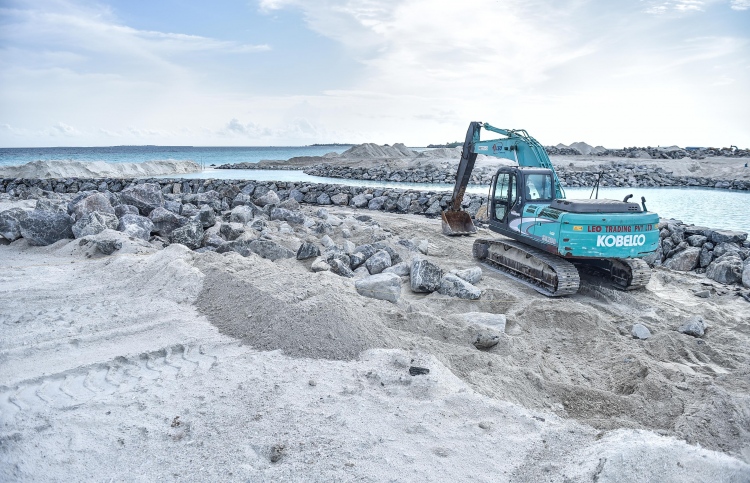 This 800 million dollar mega-project’s Township and other first phase works are estimated to finish in the third quarter of next year. After that, in the following 5 years, the plan is to complete the second phase of the project.

In this Emboodhoo Project, in total 1300 rooms will be created. With the project, 5000 jobs will also be created said Singha Estate company’s Chairman. After this project, it will give a new definition to holidaying in the Maldives. Thus, it will bring a new light to the Maldives’ tourism, along with the arrival of new life to the economy.

‘The land reclamation, which was the most difficult part is now over. We have experience in property building. To date, we have developed 4 hotels. Therefore, for us to develop a place like this is not challenging, said Bhirombhakdi.

He strongly believes that this project will become a success since the lagoon is located near to Malé city and Velanaa International Airport.

‘People living in Malé is on the increase and airport is also being developed. Therefore, we highly expect this project to become a success,’ he added.

Bhirombhakdi said tourists and Maldivians will immensely benefit from the project. 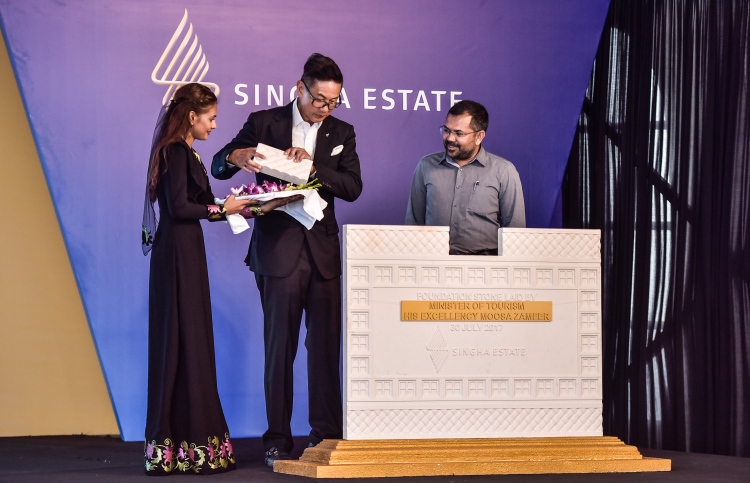 ‘The project will bring growth to areas nearby as well. We decided to go with this area due to the close proximity to Malé and airport city. We didn’t come here just to build resorts, but also to bring other businesses as well,’ Chairman said.

He said that Singha Estate company has paid 40 million dollars as acquisition cost to the Maldivian government in 2015, in order to develop the lagoon.

After the inauguration ceremony Tourism Minister Moosa Zameer spoke to Mihaaru newspaper and said, Singha Estate company did prior extensive research of the area, before commencing the project.

‘This company first showed interest after the decision for airport development project was announced by the Maldives government. Also, after the law was amended and credit rating became available, they became even more interested,’ Zameer said.

Minister Zameer said due to this project the Maldives government will receive a huge income annually. The 9 island’s lease rent and tax will also be receivable. This will also become one of the biggest revenue earning project for the government of Maldives, nearby to Malé city area.

This is, thus far, the biggest tourism project to ever take place in the Maldives. It is assumed that this will lead to many investors’ eyes to be set on the Maldives.