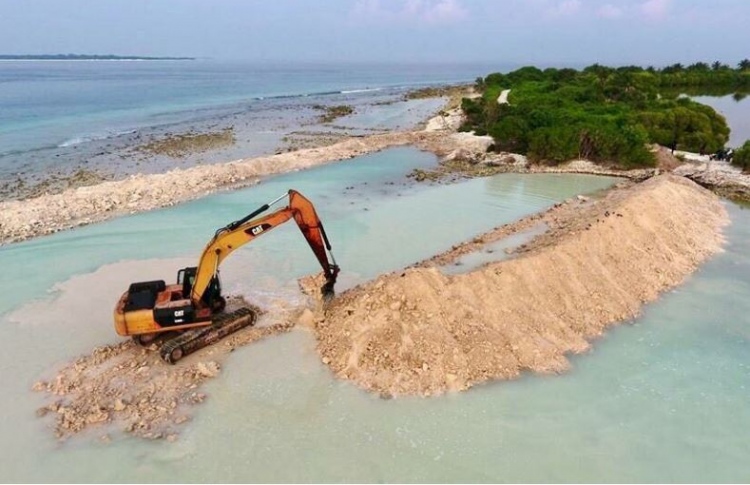 Developing the bund wall around the area to be reclaimed in HDh. Kulhudhuffushi’s mangrove swamp. PHOTO/SOCIAL MEDIA

Ecocare Maldives has filed at the Civil Court, seeking to order authorities to comply with the Environmental Impact Assessment (EIA) report on the reclamation of Haa Dhaal atoll Kulhudhuffushi island’s mangrove swamp.

Under the government’s project to develop a domestic airport in Kulhudhuffushi, six hectares of the island’s western lagoon and nine hectares of its mangrove swamp are to be reclaimed. President Abdulla Yameen had officially inaugurated the reclamation phase on Sunday.

Ecocare Maldives, a non-governmental civil association working for the protection and conservation of the environment, is seeking a court order to mandate the environment ministry and Environment Protection Agency (EPA) to follow the recommendations highlighted in the EIA report. The EIA compiled by EPA had highlighted that reclaiming part of the swamp would destroy numerous organisms as well as increase the danger of flooding in the island. The report had advised to carry out the airport development project such that it causes minimum damage to the swamp and its inhabitants.

An individual of Kulhudhuffushi had also submitted a case at the island’s magistrate court earlier, seeking to stop reclamation of the mangrove swamp. However, the court had not accepted the case.

The prospect of reclaiming 30 percent of Kulhudhuffushi’s swamp has sparked concern and outcry from the public and environmentalists around the nation. Kulhudhuffushi’s wetlands is known for its rich biodiversity and is home to several endangered species of mangroves. The EIA had notably recommended transferring the endangered species from the area to be reclaimed to another region with similar environmental conditions.

Development of a domestic airport in Kulhudhuffushi is an electoral pledge of president Yameen. Reclamation of the swamp is scheduled to end within a month, while the government has announced that development of the airport will be completed by August next year.