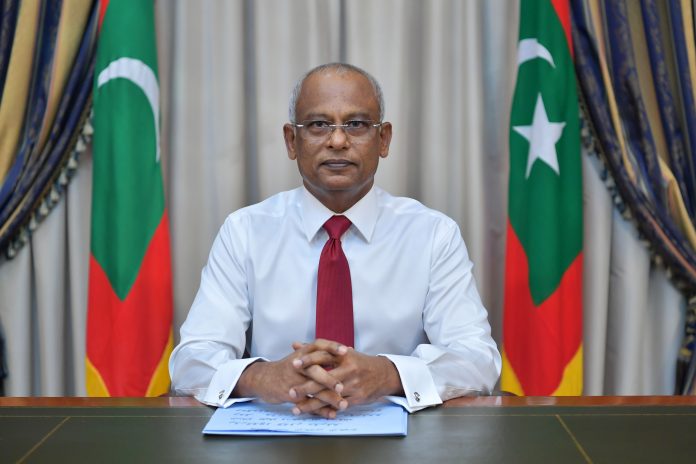 President Ibrahim Mohamed Solih condemned domestic violence and abuse as contributing factors to many of society’s ills. He also stated that society has a collective obligation to reduce abuse and exploitation and to do more to protect women and children. The President expressed these sentiments whilst inaugurating the Ministry of Gender, Family and Social Services’ ‘Geveshi Gulhun’ campaign, which is crafted specifically to help reduce instances of domestic abuse and violence.

The President stated his firm conviction that empowering women, and challenging long-held prejudicial mindsets, are essential tasks to successfully combat abuse and exploitation. He further expressed that all of us have a responsibility to strengthen reporting and redress mechanisms, to ensure that victims receive justice and are never re-victimized. The President stressed that while these may be challenging tasks, succeeding in them will be essential to ensuring social progress and harmony.

Success itself, the President added, will be contingent on the holistic efforts of government and state institutions, civil society organizations, and conscientious individuals. He lauded the work currently being done by many Maldivian civil society organizations and individuals, who have made it their mission to speak out against abuse and exploitation. The ‘Geveshi Gulhun’ campaign will complement such efforts, and facilitate the Government’s work to protect those vulnerable to abuse.

The President offered words of praise towards this new campaign, emphasising that it will be an integral part of the Government’s broader efforts against all forms of abuse and violence. These efforts include investing more resources into social protection services. The Government has now increased the budgetary allocation to the Ministry of Gender, Family, and Social Services by MVR111 million in comparison to 2018 – providing them MVR294 Million in total this year.

The President also spoke on the Government’s efforts to protect children’s rights in particular. Last year the President ratified the Child Rights Protection Act. Further, pursuant to the aforementioned legislation, he formalized the creation of the position of an independent ‘child rights ombudsman.’ The child rights ombudsman will be charged with protecting and promoting the interests of children within the Maldives. The President has already proposed his chosen nominee for this position to Parliament and is awaiting their approval.

While closing his remarks, the President reiterated that broadening and strengthening the role of women in the Maldives remains a high priority of his Administration. Crucial to achieving this, he added, will be ensuring that women’s home environments are safe and that their right to say no is always respected. The President ended by expressing his hope that we can build a community free of abuse and exploitation, and by asking God’s blessing for the Geveshi Gulhun campaign.