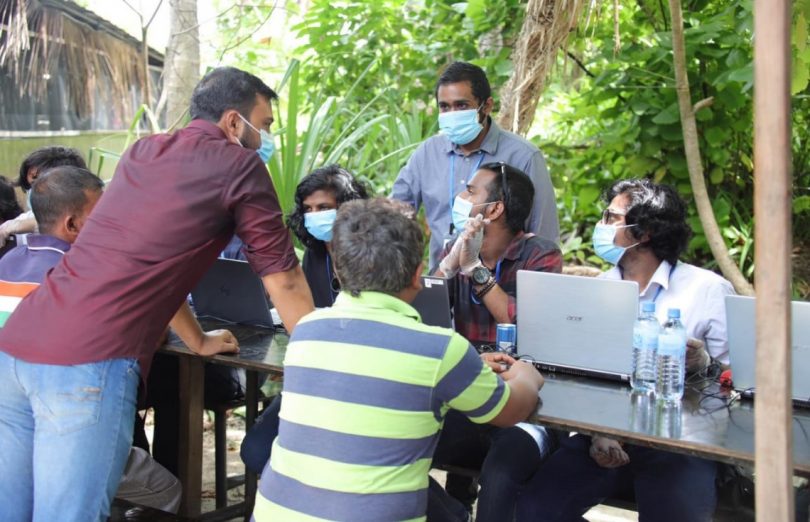 The Magistrate Court of Thulhaadhoo ordered RIX Maldives Pvt Ltd to assume responsibility for the expatriate workers stranded on Bodufinolhu, Baa Atoll and extradite them from the island immediately.

In 2019, Seal Maldives contracted the construction work of Bodufinolhu, which is being developed as a luxury resort, to RIX Maldives, a company owned by the parliamentary representative for Shaviyani Atoll’s Milandhoo constituency, Ali Riza.

Seal Maldives lodged a case with the magistrate court after 203 expatriate workers protested against six months of unpaid wages and barred 13 local staff from leaving the island. Maldives Police Service arrested 19 individuals during the operation to de-escalate the hostage situation.

In addition to extraditing the workers, RIX was also instructed to remove any of its capital or property from Bodufinolhu in cooperation with the Maldives Police Service.

According to the Thulhaadhoo Court, documentation proved that RIX had brought the employees to Bodufinolhu while mutually signed agreements granted Seal Maldives the right to order the removal of labourers from the island.

Following the contractor’s failure to comply with Seal Maldives’ instruction, the protest and hostage situation on July 2 resulted in additional damages.

Highlighting that Seal Maldives sustained irreversible damages during the incident, the magistrate court noted that any damages to the developer’s property caused by the contactor’s workers must be compensated by the latter, as per the agreements.

The police had formally accused RIX Company Pvt Ltd of human trafficking and the exploitation of foreign workers on July 6.

The company was also accused of terminating labourers that protested over unpaid wages on May 16 and sending them to the capital city of Male’.

Meanwhile, RIX Maldives’ legal team has asserted that the company did not hold responsibility for any foreign workers on Bodufinolhu except for 14 of the individuals currently on the island.

Furthermore, RIX has maintained its initial assertions that Seal Maldives was legally required to pay salaries as per agreements between the two companies, and that RIX was only assigned a management role concerning the workers. The contractor claimed that delays in crediting salaries were caused by Seal Maldives’ failure to make payments.

The developer countered with a statement noting that it had made payments in addition to those mandated by agreements, and accused RIX of neglect, stating that there was no reason preventing the contractor from paying its workers. Seal Maldives also asserted that RIX was mandated to cover insurance, healthcare and Visa application costs in addition to monthly salaries.