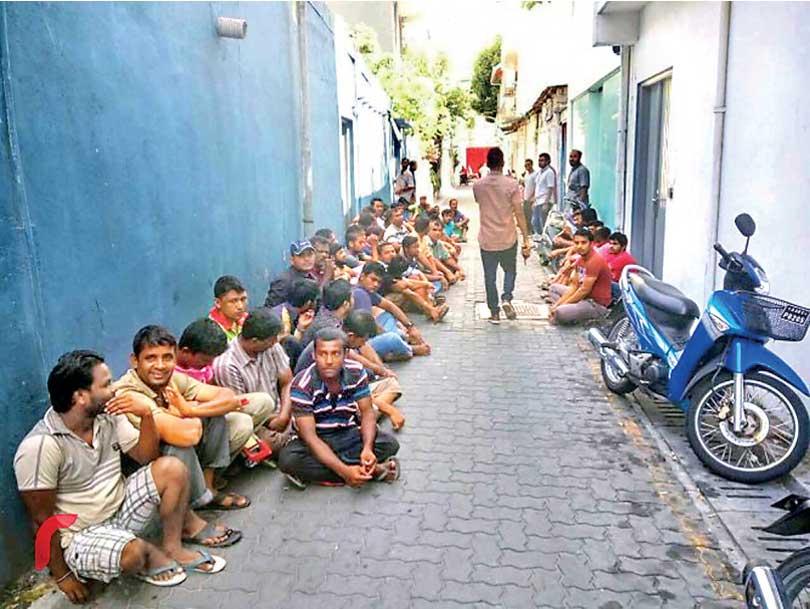 Govt had taken precautions by suspending on-arrival visas and screening people entering through airports from other islands including Male, were put under lockdown

Bangladeshi migrant workers in the Maldives

The COVID-19 pandemic has hit the tiny but prosperous Maldives hard. As per the latest figures given by the Health Protection Agency (HPA), 835 persons have been affected by the coronavirus so far. This is huge when seen against the total population of the Indian Ocean Archipelago which is now 540,544, according to an estimate by the UN.

Among the 835 infected persons, 572 are foreigners. 416 of the infected foreigners are Bangladeshi migrant workers. Bangladeshis form the bulk of the 105,000 foreign workers in the island. They are employed mostly as unskilled or low skilled workers in the construction sector.

However, in accordance with the emerging pattern in which locals are increasingly getting infected, 20 of the 45 new cases of infection discovered on Sunday were Maldivians. But still, 22 were Bangladeshis, Two Nepalese and one Indian were also among the infected. COVID-19 has so far claimed three lives. Two of the dead were Maldivians and one was a Bangladeshi.

Initially, the infections were found to be in the island resorts probably brought by White tourists. But soon, the capital town of Male became the hot spot. An AP report said that Male is one of the world’s most congested capitals, housing more than 150,000 people in a 5.8 sq. km area. The report further said that the government had taken precautions by suspending on-arrival visas and screening people entering through airports and arriving from other islands. Six inhabited islands, including Male, were put under lockdown.

Officials have blamed the congested accommodation given to the migrant workers in Male for the quick spread of the infection. And the numbers involved are huge. According to AP, there are 60,000 migrant workers, mostly from Bangladesh, working as unskilled labourers in Male itself.

The government estimates that 105,000 migrant workers are currently in the Maldives. This number includes about 60,000 unskilled migrant workers without documentation such as passports and work visas. These workers had either been trafficked into the Maldives or had surrendered their documents to their employers who hold them to ransom. The Maldivian human trafficking industry is believed to be worth US$ 128 million.

In locked down Male, it is suspected that couriers who deliver daily essentials to households could be the principal source of the infection. Many of the couriers are migrant workers, sources in Male said. Assistant Police Commissioner Ismail Naveen revealed to the media on Sunday, that 18 quarters in Male in which 837 migrant workers live were identified as hot spots. Their movement in and out of these quarters has been restricted.
Expatriate workers are made to reside in deplorable conditions without proper sanitation, especially in Male. This has been subject to trenchant criticism from human rights groups; both local and international. The Maldivian government had recently devised a plan to remove 1000 migrant workers and put them in two special housing complexes in Gulhifalhu and Hulhumalé. In the government’s COVID clinics, where migrant workers will also be treated, they need not produce their work permit or documentation. This will prevent workers without visas and passports from hiding their health condition.

A former top official in the Maldivian government told this writer that the Maldives is now paying heavily for not looking after the migrant workers who build and service the country.

“If the Maldivians have a good standard of living and enjoy free education and free health services, it is because of the money earned from tourism. And if tourism is booming it is because of the resorts built by the migrant workers and serviced by migrant workers. If congested Male is clean it is because of the migrant conservancy staff. And yet, they are poorly paid, poorly housed and cheated by the employers as the government turns a blind eye. However, it is not one government which is responsible for this, successive governments have to be blamed.”
Reports have found that most migrants are either victims of human traffickers or discriminatory employers, who take away their documentation and use these migrants as slave labour. As such, many migrant workers find it difficult to obtain healthcare.

According to the International Organization of Migration (IOM), although employers in the Maldives are legally obligated to provide all migrant workers with health insurance, coverage is often minimal and many are not informed they have insurance at all. Employers also illegally confiscate workers’ papers, making it difficult for them to obtain health care. Furthermore, the Maldives has not ratified the International Convention on the Protection of the Rights of All Migrant Workers and Members of their Families.

Due to the unhealthy living conditions, migrant workers contract diseases. Between 2014 and 2016, the Health Protection Agency recorded 4,453 hepatitis B-positive cases, with the Bangladeshis being the majority affected (88%), followed by Indians (5%) and Chinese (3%). The absolute number of migrants diagnosed with dengue increased from 104 in 2014 to 295 in 2015 and 234 in 2016. Compared to available data on other diseases, dengue appeared to be the second most prevalent disease among migrants after hepatitis B. Higher incidences were found among Bangladeshis, followed by Indians and Sri Lankans. The HPA recorded 39 TB-positive cases among migrants from 2014 to 2016, mostly affecting Bangladeshis (28) and Nepalis (6).

The tourism sector was initially subject to a limit on the number of foreign nationals it could employ. However, the limit was gradually reversed from a ratio of 55:45 (locals to foreign nationals, respectively) to 45:55. The ratio is not strictly observed by all employers, as they find it difficult to attract local workers for various reasons, for example, resorts in isolated locations, the stigma associated with work in resorts, and the lack of soft and hard skills among local job seekers, IOM said.

But there is local opposition to recruiting foreign workers in such large numbers. The Tourism Employees Association of Maldives (TEAM) pointed out that resorts are hiring foreign staff up to 70%, while they could very well bring the figure down to 40%. According to TEAM, local talent exists but they get weeded out.
“Resort operators claim that it is difficult to acquire Maldivian staff. However, to say this, there is no labour audit in the Maldives. There are no records of persons actively seeking jobs,” TEAM President Zahir said.

He pointed out that there are many jobs in accountancy and information technology which Maldivians can fill. Some of these jobs carry a salary of MVR. 20,000 which is very attractive for the Maldivians. But still, employers say that suitable Maldivians are not available. Even in a lower category like security staff, Maldivians can work, but Nepalese are preferred.

Because of the shake-up brought about by the COVID-19 invasion, the Maldives get a chance to regulate its migrant labour policy, give a better deal to the migrant workers and also to see that Maldivians are not driven out of the labour market by profiteering employers who go for cheap imported or trafficked labour. If these issues are not tackled there could be social unrest besides health hazards in the not too distant future.