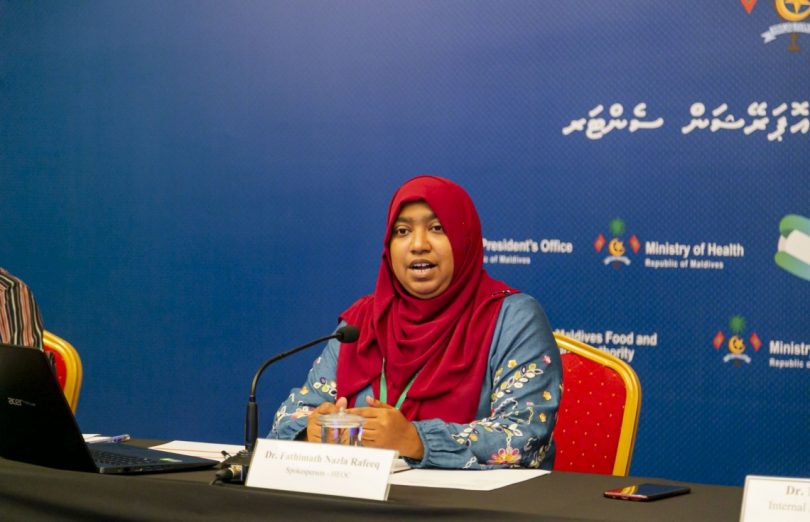 Health Protection Agency (HPA) revealed on Monday night that the elderly man who passed away from COVID-19 earlier that day was among the individuals infected on the premises of Indira Gandhi Memorial Hospital (IGMH).

The Maldivian male, aged 80, was receiving treatment at the DH11 facility in the state’s largest medical facility, IGMH, when he passed at 0435 hrs on Monday morning. He was the 12th person to succumb to the disease in the Maldives.

Speaking at the virtual press briefing regularly held by the Health Emergency Operation Centre (HEOC), spokesperson Dr Nazla Rafeeq disclosed that the deceased had terminal illness as well as other health complications.

She confirmed that he was one of the patients that tested positive for COVID-19 after being transferred to a ward from the Intensive Care Unit.

HEOC reported this week an increase in the number of COVID-19 cases that involve persons infected within IGMH or through individuals in-contact with carriers traced back to the hospital.

Till date, authorities have confirmed 11 individuals that tested positive for COVID-19 in IGMH, including two staff, five patients, and two helpers.

The infection spread in IGMH’s Intensive Care Unit surfaced last week after a cancer patient was tested for the disease prior to his second surgery. The Indonesian national passed away before HPA received his test results, which were positive.

However, HPA had stated that his primary cause of death was cancer complications and that his passing did not fall under the international criteria to determine COVID-19 fatalities.

The Maldives presently has a total of 2,491 confirmed and 361 active cases of COVID-19. Thus far, the country records 2,113 recoveries and 12 deaths. The deceased include seven Maldivians, four Bangladeshis, and one Filipino.

However, the number of recoveries have continued to rise, with 82 per cent of patients now recovered.

On March 12, WHO classified the spread of COVID-19 as a global pandemic. To date, the new strain of novel coronavirus has infected over 11.7 million people and claimed over 541,000 lives around the world. However, out of those infected, more than 6.7 million people have recovered.