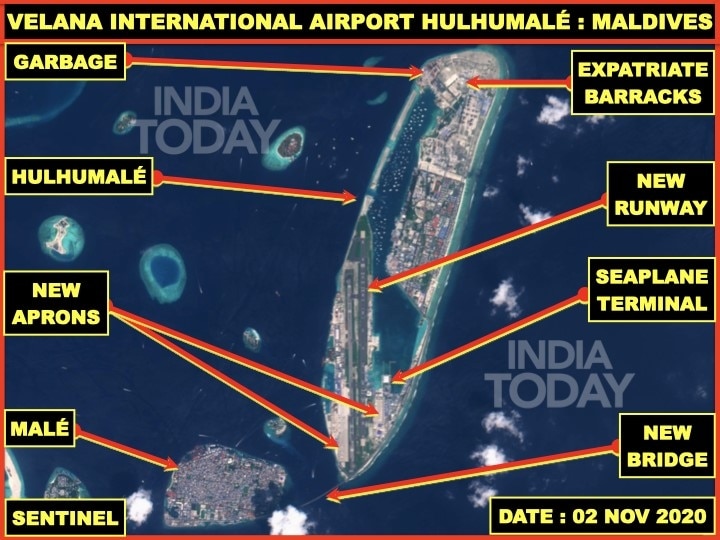 In February 2012, India’s GMR Group was released from the expansion project of Maldives’ major Velana International Airport after the Mohamed Nasheed government was overthrown in a coup. Two years later, the contract was handed over to a Chinese state-owned firm named Beijing Urban Construction Group.

And now, another six years later, the expansion project is still incomplete, facing hurdles one after the other.
The Speaker of Parliament and ex-President, Mohamed Nasheed, had recently warned the Maldives to be aware that the new infrastructure projects have incurred a massive loan of $3.1 billion which can never be paid from revenue generated by these projects.

Similarly, the World Bank had also warned Maldives of external debt distress that could rise to 120 per cent of the GDP by 2020. India Today OSINT Team investigates the projects in the Maldives through satellite images over the past decade and up to November 2 this year.

NEW RUNWAY NOT YET OPEN

The new airstrip, which is supposed to boost Maldives tourism and in turn its economy, was completed with the last layer of asphalt laid in August 2018. The opening ceremony for the new runway was attended by then-President Abdulla Yameen in September 2018.

The comparative satellite images of October 2018 and October 2020 clearly show that no progress has been made on the second airstrip. The second runway which has crosses marked all along the entire length of the airstrip is still not operational as of November 2, 2020.

The incomplete new airstrip is a big danger for flights landing at Hulhumalé airport. In 2018, an Air India flight had wrongly landed on the under-construction runway.

There are two new aprons already constructed in the Southern end of the airport. They have been tested with A320 Airbus aircraft in 2019. There is another apron under construction as seen on satellite imagery of September 25, 2020.

The old seaplane terminal is still being used for all flights probably due to some kind of dispute between the operators and the construction company, backed by the Chinese Communist Party (CCP).

The satellite images of the past three years show a massive deployment of the Chinese labour force into Hulhumalé. There are at least 80 living barracks observed all over Hulhumalé on the latest satellite images.

The Chinese Ambassador to the Maldives claimed that China State Construction Engineering Corporation (CSCEC) has been constructing four barracks for 800 so-called expatriate labourers in North Hulhumalé.

The dichotomy aside, most worrying part of this deployment is the increase observed over this year throughout the pandemic is almost 45 per cent. Almost 32 per cent of this new deployment has been observed barely 250m from the new seaplane terminal that has come up only after February 2020.

If the rumours are to be believed, the reason for this increase in labour could be something very ominous. The rumours from ground sources indicate that the new labourers are stockily built like armed forces personnel.

These specially endowed labourers could be used to resolve the existing dispute between the seaplane operators and the construction company that is hindering operationalisation of the second airstrip.

Another very concerning change observed in the latest satellite images is that China has adopted to dumping garbage in the North of Hulhumalé which has become an eyesore now.

The Maldives which is very particular about cleanliness and dumping of garbage seems to be keeping quiet over this act. The Chinese on the other hand may be planning to sell this scrap or awaiting some reclamation project in the Maldives.