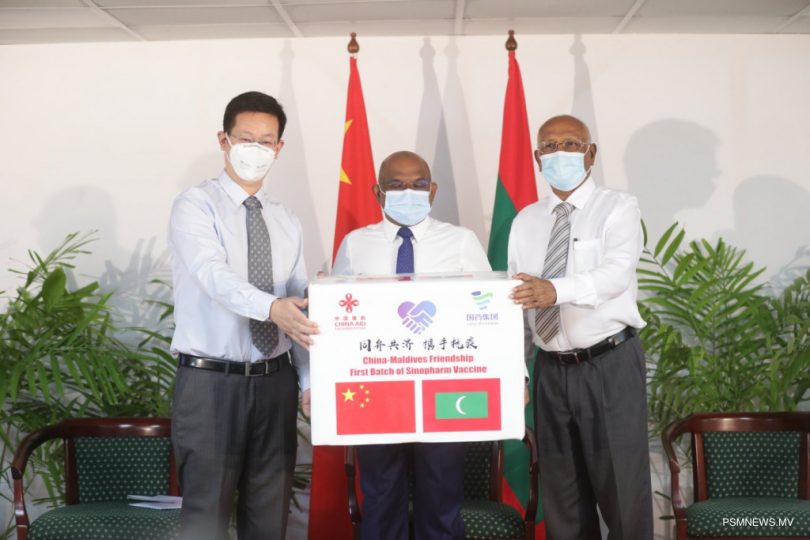 The first batch of vaccines against COVID-19 and anti-epidemic materials donated by China to the Maldives arrived Wednesday night and were handed over on Thursday.

Chinese Ambassador to the Maldives Zhang Lizhong officially handed over the Sinopharm vaccines and some syringes to Maldivian Foreign Minister Abdulla Shahid and Minister of Health Ahmed Naseem in an official ceremony held Thursday.

Speaking at the event, Zhang said the donation was a sign of the bonds of friendship between China and the Maldives and the donation fulfils China’s commitment to making the vaccines a “global public good.”

The vaccine donation bears significance in cooperating to fight COVID-19, winning the battle at an early date, and promoting resumption of normal personnel exchanges and cooperation between China and the Maldives, the Chinese ambassador said.

China is ready to provide more support within its capacity to the Maldivian side in fighting the epidemic and recovering the economy, he said

Foreign Minister Shahid thanked the government and the people of China for contributing to the country’s vaccination program, noting that Chinese companies in the Maldives have also contributed to the country’s anti-epidemic efforts.

Health Minister Naseem also thanked the Chinese government, hoping to strengthen cooperation between China and the Maldives as so to win an early victory over the pandemic.

The Maldives approved China’s Sinopharm vaccine for emergency use on March 15.