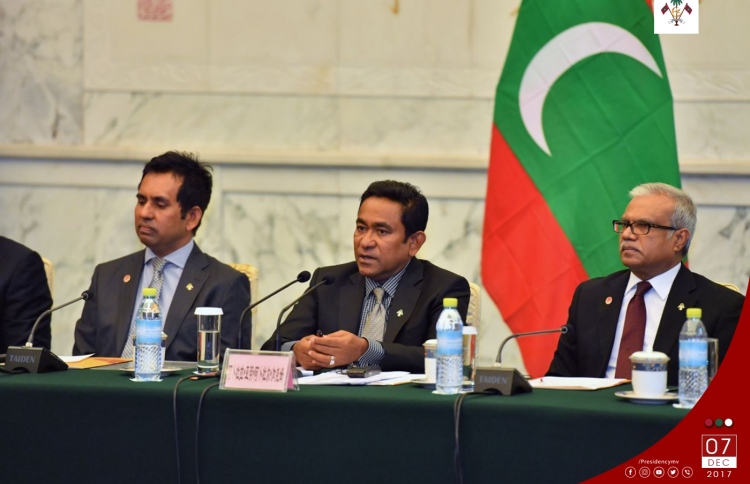 The Maldives would always welcome foreign investments and the best time to invest in the archipelago is now, proclaimed president Abdulla Yameen on Thursday in China.

Yameen and first lady Fathimath Ibrahim is currently on a state visit to the global superpower. Speaking at the Business Leaders Forum organised by the Maldivian embassy in China, Yameen stated that the Maldives is open to Foreign Direct Investments (FDI) and now is the optimum time to invest.

In his address, the president noted that the number of investors interested in the Maldives is increasing year by year. Declaring that the Maldives is undergoing major economic changes, Yameen highlighted the government’s targets to develop reclaimed suburb Hulhumale as a Youth City and establish a Special Economic Zone in the island nation. He assured that the Foreign Investment Act and Special Economic Zones Act ensure full protection for investments.

The president also emphasized the role China played in progressing the economy of the Maldives, and thanked China’s president Xi Jinping, his government and the people of China. Yameen also expressed hopes to further enhance relations between the two nations.

The president and first lady arrived in China on Wednesday at the invitation of Xi Jinping. During the state visit, Yameen would call on the leaders of China, and hold official talks between the governments of both countries, including signing of key agreements to enhance bilateral relations in the sectors of trade, professional and socioeconomic development, and technology among others.

During the first leg of his visit, Yameen had met with Maldivians residing in China on Wednesday. The president also attended a special ceremony held to mark 45 years since the establishment of diplomatic relations between the Maldives and China.