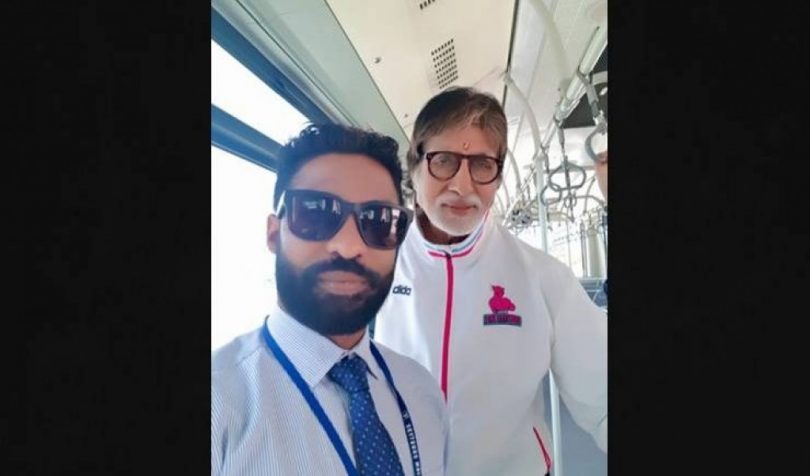 B-Town superstar Amitabh Bachchan poses with his regal stance with an awestruck local.

Bollywood’s most applauded and sought after star, the ‘Shahenshah’ of Hindi cinema, Amitabh Bachchan arrives in Maldives on Tuesday morning to celebrate his 75th birthday.

He has arrived in Maldives amid wild talks in B-Town of the actor cancelling his trip to Maldives as well as no apparent plans set for his birthday.

The legendary actor landed in Maldives with son Abhishek Bachchan, daughter-in-law Aishwarya Rai Bachchan and granddaughter Aaradhya Bachchan. While it was reported that Big-B’s spouse Jaya Bachchan and daughter Shweta Bachchan-Nanda would travel with them, it is unclear if they arrived in Maldives or not.

The multi award-winning superstar had last celebrated his birthday when he turned 70 back in 2012, after which he had celebrated a closed and reclusive birthday every year exclusive to family and close friends.

While Bachchan Sr., has landed in Maldives to celebrate his birthday, he was scheduled to arrive to partake in the 70th South East-Asia Conference hosted by UNDP, where he was slated to deliver a keynote speech. However the B-Town actor cancelled his trip in the final minute due to ailing health issues.

Previously the Bachchan family landed in Maldives in 2016 to celebrate son and actor Abhishek Bachchan’s birthday. The family enjoyed their vacation at One & Only Reethi Rah Resort.