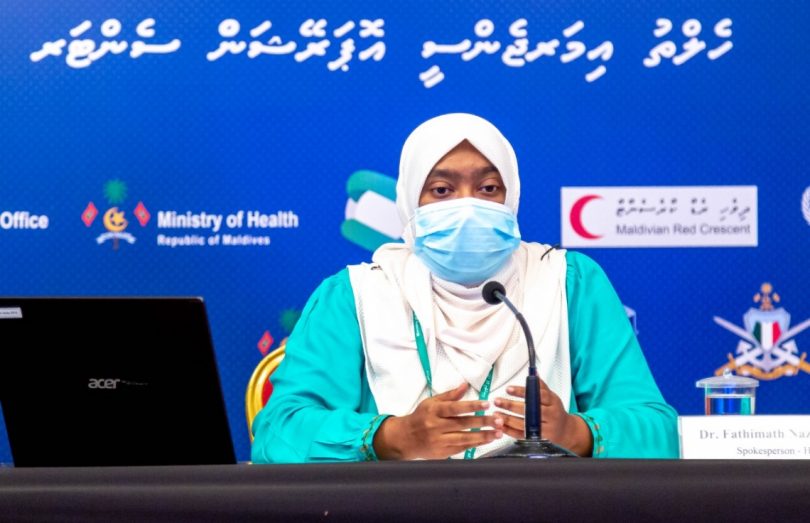 Health Emergency Operations Centre (HEOC) revealed on Wednesday night that, till date, a total of 278 individuals were fined for going out in public without wearing face masks.

Speaking at a media briefing held by HEOC, the centre’s Spokesperson and Health Protection Agency (HPA)’s Medical Officer Dr Nazla Rafeeq stated that 62 of these individuals were fined between 1800hrs on Tuesday to 1700hrs on Wednesday.

Authorities, on June 30, mandated wearing face masks in public spaces of the capital city of Male’ in response to a surge in COVID-19 cases in the country. Later, the same day, HEOC revealed that individuals in public spaces without masks would be fined by MVR 1,000 starting from August 1.

Dr Nazla revealed that officers of Maldives Police Service are patrolling the streets of Greater Male’ region to ensure that the guidelines are properly implemented.

According to Dr Nazla, 1,356 individuals were advised during the past week for no wearing masks in public. She added that police was also advising individuals that step outside their homes during curfew from 2200hrs to 0500hrs.

“79 [individuals] were fined [for breaking curfew] within the last 24 hours”, she said during Wednesday night’s press briefing.

The recent spike reduced the total amount of recovered patients from the peak 86 to 53.7 per cent.

On March 12, WHO classified the spread of COVID-19 as a global pandemic. To date, the new strain of novel coronavirus has infected over 20.8 million people and claimed over 747,500 lives around the world. However, out of those infected, more than 13.7 million people have recovered.