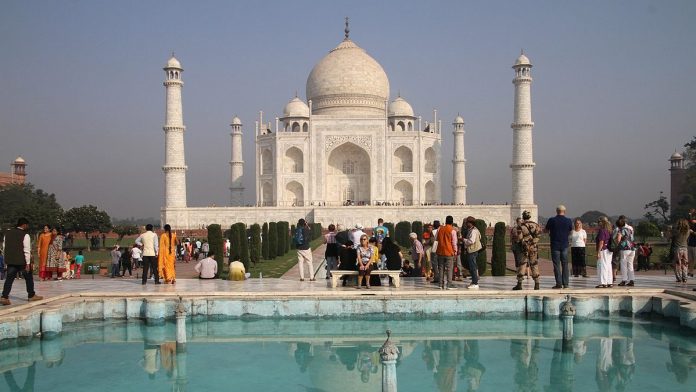 Agra, home of the Taj Mahal, hosts millions of tourists all year round | Photo: Commons

New Delhi: In the past two decades, South Asia has emerged as a popular tourist destination due to its natural and cultural diversity, as well as price competitiveness, a new report by Brookings India, a nonprofit public policy organisation, reveals.

The study titled ‘Travel South Asia: India’s tourism connectivity with the region‘ notes that South Asia has improved tremendously in terms of tourism, especially since 2017, and India is at the helm of the growth.

The report highlights that the economies of South Asian countries like Bhutan, Maldives, Nepal and Sri Lanka are sustained by tourism, and yet India has become the most preferred tourist destination in the region.

One of the reasons for this is the National Tourism Policy that India adopted in 2002 and the tourism ministry’s ‘Incredible India’ campaign then. While India’s share of global tourist arrivals stands at 1.2 per cent, it has seen a gradual growth in travellers from the South Asian region, who account for nearly a third of the total tourists.

Due to “its proximity and cultural linkages”, Bangladesh is a prominent part of India’s list of top 10 tourist source countries, which also includes Sri Lanka, Nepal, China, Maldives and Afghanistan.

In 2013, when the Revised Travel Arrangement between India and Bangladesh was liberalised — bringing changes to the 1972 Agreement on Passport and Visa System, resulting in ease in obtaining a visa — “the arrival of Bangladeshi tourists to India increased by 80 per cent”, according to the report.

The Brookings report also cites a detailed 2018 survey on ‘Study on Visits of Nationals of Bangladesh in India’ by the Indian Institute of Tourism & Travel Management (IITTM), which revealed that “a majority of the tourists visited India for religious and leisure purpose – 37% and 26% respectively – about 14% of Bangladeshi nationals visited India for medical treatment”.

The researchers also study the ‘openness’ of visa regulations in eight South Asian countries — Sri Lanka, Bangladesh, Bhutan, Nepal, Maldives, India, Afghanistan and Pakistan. They found that “Bhutan, Maldives, and Sri Lanka have the most open tourist visa policies towards citizens of the other South Asian countries”, with India securing the fifth place in the list.

Offering a comparative analysis between India and China — with the latter’s increase in tourism imports and a growing presence in the region — the report notes that India remains a tourist favourite destination in South Asia.

“The last decade has witnessed an unprecedented rise in the number of Chinese tourists (in South Asia), approximately by 753%,” the report notes.

In 2007, Chinese tourists stood below 1 lakh, with most of them visiting the Maldives.

The report attributes this jump to “increased air connectivity and a rising middle-class with growing disposable income”. Incidentally, China has invested significantly in infrastructure, housing, hotels and airlines in the Maldives and has bought a strategically important site in Sri Lanka.

Addressing the effect of Covid-19 on tourism, the report suggests: “Governments must thus pivot to focus considerably more attention on regional tourism through investments in infrastructure and services, particularly digitisation to reduce human transactions,” adding that India must leverage its cultural similarities with its neighbours.