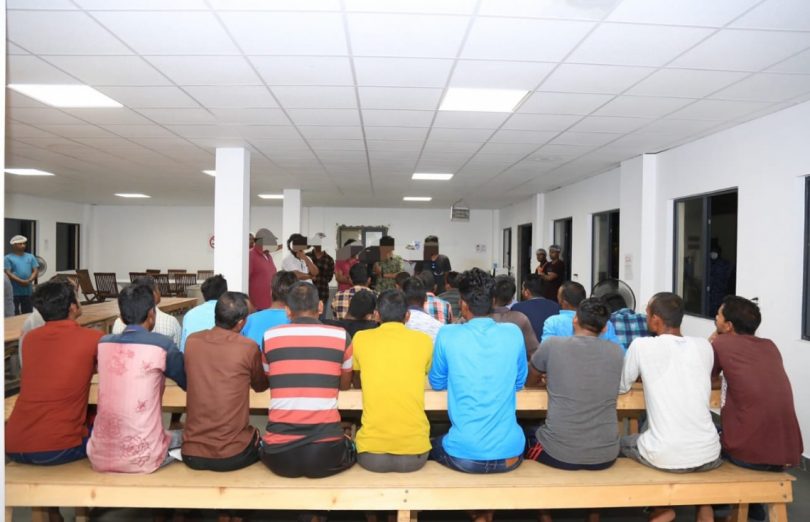 Maldives Police Service revealed late Tuesday that 22 expatriate workers were arrested and remanded in connection with the protest in Vaavu Atoll.

The Felidhoo Magistrate Court remanded the expats for 15 days, authorising the police to detain them during the investigation.

The protest on Monday night was staged on a yet undisclosed island, which is being developed as a tourist resort. Authorities are yet to confirm the reason for the demonstration.

Although no one was injured, the police have revealed that the protesters obstructed the ongoing work on the island and damaged their supervisor’s room.

The workers’ sponsor had also intervened to solve the issues that led to the demonstration.

The protest in Vaavu Atoll was one of several expat-led demonstrations that have taken place amid renewed concerns from rights groups as well as the general public, over the continued exploitation of expatriate workers in the Maldives.

On July 2, Maldives Police Service arrested 19 out of 203 expatriate workers which partook in protests over their employer’s failure to pay six months of salary, which culminated in the holding of 13 Maldivian staff hostage at Bodufinolhu, Baa Atoll, an island being developed as a resort property by Seal Maldives.

Meanwhile on Tuesday, Chief of Defence Force Major General Abdulla Shamaal, in a meeting with the parliamentary Committee on National Security and Foreign Relations, described the recent actions of expatriate workers as a threat to national interests.