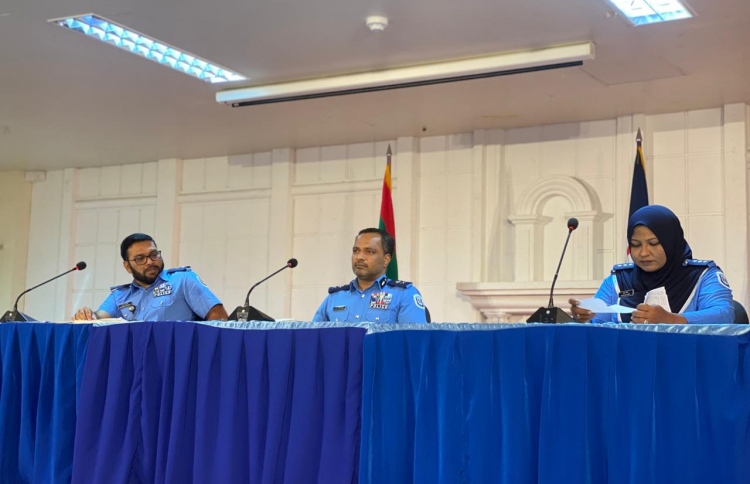 Maldives Police Service, on Thursday, revealed that testimonies from 11 individuals were collected as part of the investigation into the sexual assault of an expatriate worker on a liveaboard docked at Hulhumale’ lagoon.

Speaking at a press conference, Chief Inspector Mariyam Azma stated that discussions were ongoing with the Prosecutor General’s Office concerning the case, which was reported on June 26.

The Chief Inspector also disclosed that the Forensic Diving Team recovered the victim’s mobile phone from the harbour area.

She further added that the victim had been referred to the Ministry of Gender, Family and Social Services for psychosocial support.

During the press conference, the police also reiterated that initial media reports on the case, published by Mendhuru, were unreliable as the victim had denied providing them with an interview. Highlighting that Mendhuru was not a registered media outlet, Chief Inspector Azma stated that the victim expressed concern over the outlet’s claims and requested that her photographs be removed from their website.

In response to questions posed by journalists, Deputy Commissioner of Police Abdul Mannan Yoosuf, stated that officers that arrived on the scene had forgone testing the perpetrators for alcohol as they had decided it unnecessary to do so.

“The police did not do anything wrong with this case”, asserted the Deputy Commissioner.

The police declined to divulge the identities of the perpetrators that have been widely alleged to have connections with politicians serving in the incumbent administration.

The victim, a 27-year-old woman, was reportedly invited aboard the safari by a friend, and was later sexually harassed and assaulted by two men. After the woman jumped off the vessel in an effort to escape, she was picked up by a dinghy and transported to the jetty.

The two men, both aged 39, were arrested at the scene. However, they were later released with the authorities claiming, based on the information collected, that detaining them until the investigation concluded would be unnecessary.

Initial reports by local media state that the victim was raped aboard the vessel and that the police had released the suspects after receiving phone calls from “people high up”.

However, the police have maintained that the victim was harassed and not raped. Local media outlet Mihaaru published an interview with the victim which also asserts that the case did not involve rape.

In the interview, the victim reportedly stated that she did not wish to press charges, that she did not have complaints regarding the police investigation, and that she had not spoken to any media outlets prior to Mihaaru.