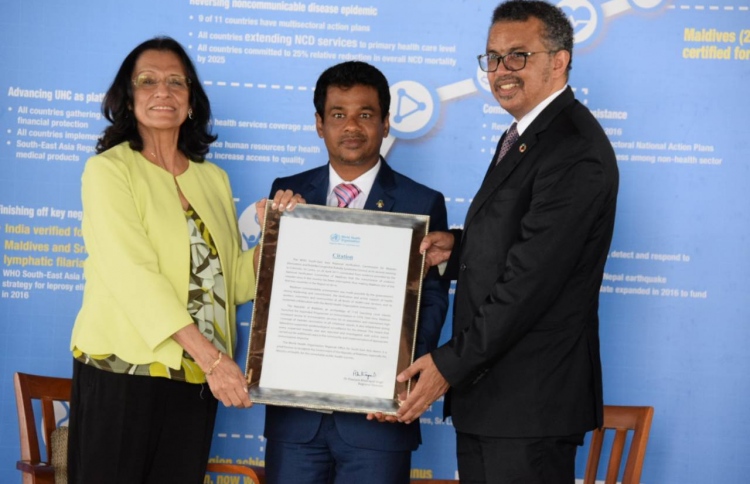 Health Minister Abdulla Nazim Ibrahim (C) receives WHO’s award to the Maldives for the successful eradication of measles from the country. PHOTO/HEALTH MINISTRY

World Health Organisation (WHO) on Thursday presented the Maldives an award for successfully eliminating measles from the country.

The award was accepted by the Maldives’ Minister of Health Abdulla Nazim Ibrahim.

WHO declared the Maldives free of measles on June 13 this year. In addition to the Maldives, Bhutan was also declared measles free, making the two countries the first in the South Asian region to achieve the target of eradicating measles before the year 2020.

Vaccination against measles commenced in the Maldives in 1983. The first recorded case of measles in the archipelago was in 2009.

A special campaign was launched in 2005-2007 to raise awareness and prevent the spread of measles in the Maldives. Health Protection Agency (HPA) also conducted a national campaign against measles and rubella in February and March this year.

During the national campaign against measles and rubella in February and March 2017.