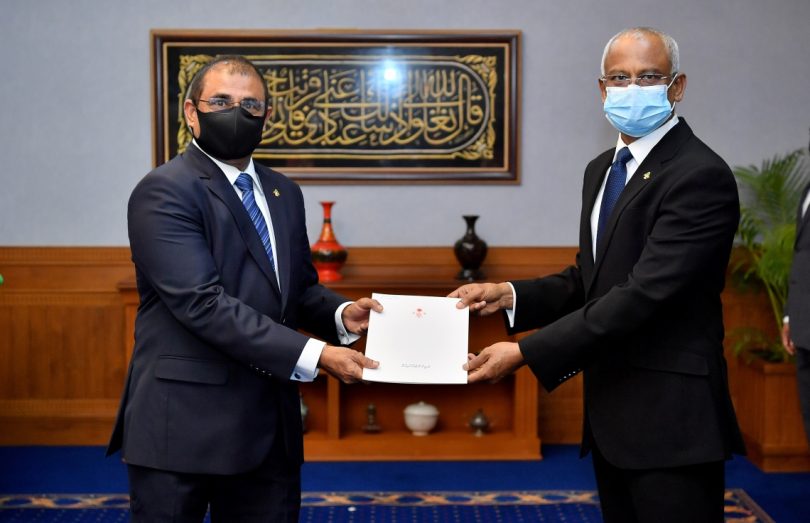 Dr Abdulla Mausoom retook his oath as the Minister of Tourism on Sunday.

The recently appointed minister resigned from his post amid the controversy raised over his position as a Managing Director of a business venture at the time of his original appointment.

Following his resignation, President Ibrahim Mohamed Solih reappointed Dr Mausoom as the tourism minister and presented him with his credentials. The new minister was also sworn in once more, according to the spokesperson of the President’s Office Ibrahim Hood.

The committee stated that as Dr Mausoom, at the time of his original appointment, had not withdrawn as the Managing Director of a company, it invalidated his initial oath. Although he later resigned from his post, the committee report concluded that Dr Mausoom’s business connections meant he was ineligible for the post.

During the committee discussion phase, parliamentarians noted the issue as minor but recommended Dr Mausoom retake his oath to avoid any disputes regarding his appointment.

Dr Mausoom’s former services in the Maldivian government, in particular the tourism sector, include positions as Minister and Deputy Minister of Tourism and Civil Aviation, and Minister of Environment, Energy and Water in 2008 during the administration of former President Maumoon Abdul Gayoom. He was a senior member of Maldives Tourism Promotion Board and parliamentary representative for Haa Alif’s Kelaa constituency in 2009.

Prior to his ministerial appointment in the Maumoon government, Dr Mausoom led the board of Maldives Association of Tourism Industry (MATI) in the wake of the 2004 Indian Ocean tsunami.

His appointment as the tourism minister came approximately a month after his predecessor, Ali Waheed, was sacked over allegations of sexual harassment raised by the female staff of the tourism ministry. Following Waheed’s initial refusal to resign as per President Solih’s order, he was terminated on July 9.