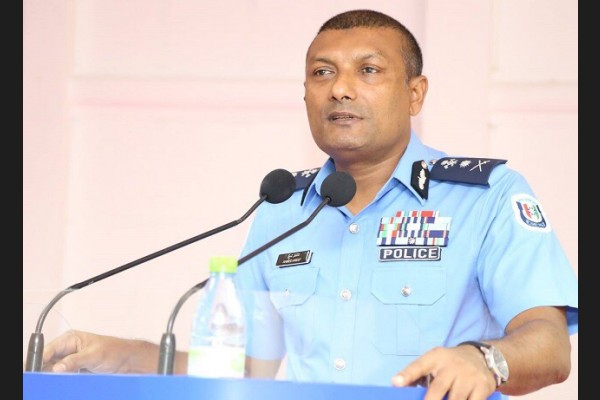 The original Dhivehi article was published on Raajje.mv website on 29th January 2018.

Rumour has it that in the disputes arose in relation to the second arrest of Dhiggaru Constituency MP Ahmed Faris, Commissioner of Police Ahmed Areef’s star has fallen. It is the hottest topic talked about around Holhu’ashi* and Joalifathi* time. There is indeed a reason for that.

In a tweet by President Office’s Spokesperson, Ibrahim Muaz Ali indicated something had gone bad. Previously, the president hasn’t given direct instructions to execute, whenever a court issues an arrest warrant. And that is not how things are done constitutionally. According to people’s interpretations of the spokesperson’s tweet, since CP Areef didn’t follow the order, the president had to follow through it. And the word around was that the commissioner was asked to resign and was ‘detained’ at Shaheed Hussain Adam building for a long time.

Amidst the rumours, Home Minister Azleen Ahmed said something strange. He said that president has full ‘confidence’ in CP Areef. The rumours about CP Areef are lies and are fabricated to create discord.

Minister Azleen’s statement becomes a ‘strange’ statement due to many reasons. This is nothing new to Maldivians. President Abdulla Yameen having strong ‘confidence’ in people close to him is something from which examples can be given about. Based on what has happened in the past, if President Yameen expresses his confidence in someone, that could be the beginning of the end of that person.

Prior to the arrest of former Vice President Ahmed Adeeb, President Yameen said he has 500% ‘confidence’ in him. Fate did really tell how much confidence he had in him, Adeeb ended with a 33-year jail sentence and 13 other charges. This is the amount of confidence President Yameen had with his closest ally in very recent times.

When a pistol and bullets were discovered in the apartment of former Defense Minister Colonel (Rtd.) Mohamed Nazim’s apartment, President Yameen met him and said he doesn’t believe that Nazim would do such a thing and he has full confidence in him. Yet, look at what happened to Nazim as well. Soon after President Yameen said that, within a week, he was stripped of his ministerial status and subsequently arrested. He was then prosecuted for allegedly importing and possessing military weapons, and jailed for 11 years. Although the weapon was proven not belonging to him, still with the ‘high confidence’ placed in him, his release was rejected.

From these examples, it can be deduced that if President Yameen expresses his confidence in someone, then they are doomed. Therefore, the question is raised whether CP Areef is also going down this road.

*Holhu’ashi – traditional public gathering places in an island usually with seating made of coconut tree trunk.
*Joalifathi – fixed hammocks, traditionally made of coir rope used as an outdoor seating.