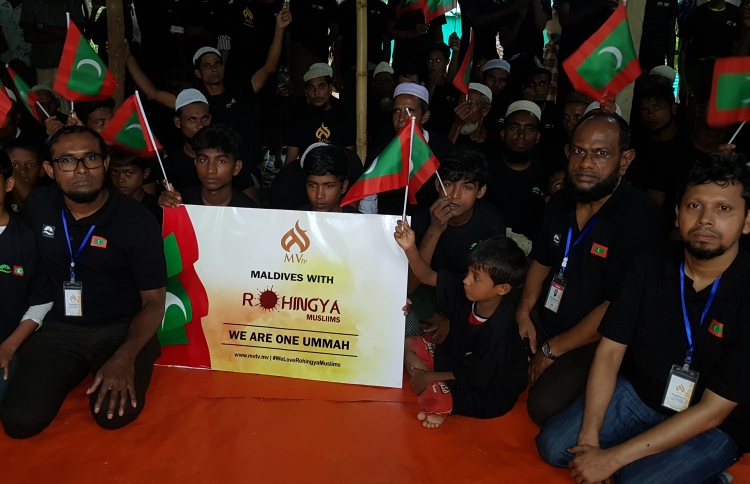 The situation of Rohingya refugees, who have fled the ongoing persecution in Myanmar to neighbouring Bangladesh, is graver than can be described, stated former Minister of Islamic Affairs Dr Abdul Majeed Abdul Bari on Sunday.

Dr Majeed is currently in Bangladesh, with a delegation from the Islamic Foundation of the Maldives, to hand over MVR 1 million raised by the foundation to relieve the plight of the Rohingya Muslims.

Speaking from the overstretched refugee camps near the Bangladesh-Myanmar border, Dr Majeed said that the refugees are suffering from food shortages among other basic needs.

“They spend all day walking from one tent to another, only to receive a small amount of rice. It’s already sunset by then. And they [get enough] to only feed the children,” he said.

“Their situation is worse than I can describe.”

Members of the Islamic Foundation delegation currently in Bangladesh to hand over MVR 1 million to aid the Rohingya refugees. PHOTO/ISLAMIC FOUNDATION

Dr Majeed said that the military helicopters of Myanmar are visible across the Bangladesh-Myanmar border, and that some refugee tents had been evacuated on Saturday as well for fear of an attack.

“From here, we can see fires on the Burmese side of the border,” he added, referring to the state of Rakhine in Myanmar, from which the Rohingya minority hails. “Yesterday, we saw in the news that another 10,000 people from that state entered Bangladesh.”

The Islamic Foundation had handed over the MVR 1 million to international humanitarian organization, Islamic Relief Worldwide, to deliver the funds to the Rohingya. The funds were presented by the foundation’s President Ibrahim Fauzy and Secretary General Ibrahim Nazim.

Moreover, the delegation from the Islamic Foundation visited various tents across the refugee camps over four days, presenting individuals with money, garments and food.

Shedding light on the experience, Dr Majeed said that the behaviour he witnessed from the refugees was not what he had expected from displaced people.

“They didn’t follow us, begging [for food],” he said, declaring that the Rohingya Muslims exhibited exemplary discipline and conduct.

The former minister went on to note that the surrounding Asian giants of India and China are not providing any support or assistance to the displaced Rohingya Muslims.

The Islamic Foundation had raised MVR 1 million to relieve famine-struck Somalia in 2011 as well. The funds then had also been handed over to Islamic Relief Worldwide to be delivered to Somalians in need.

The persecution of the Rohingya by the security forces of Myanmar is at the centre of the international eye, as hundreds of the Muslim minority have been slain in a brutal military crackdown. Over 500,000 Rohingya have fled to Bangladesh while the United Nations have accused the government of Myanmar of committing “crimes against humanity” and carrying out “ethnic cleansing” of Rohingya Muslims.

However, Myanmar’s State Chancellor Aung San Suu Kyi refuses to discuss the quandary of the Rohingya. The Nobel Peace Prize laureate’s government refuses to recognise the Rohingya as an ethnic group in Myanmar, and has blamed the violence in Rakhine State on the “terrorists” in the region.