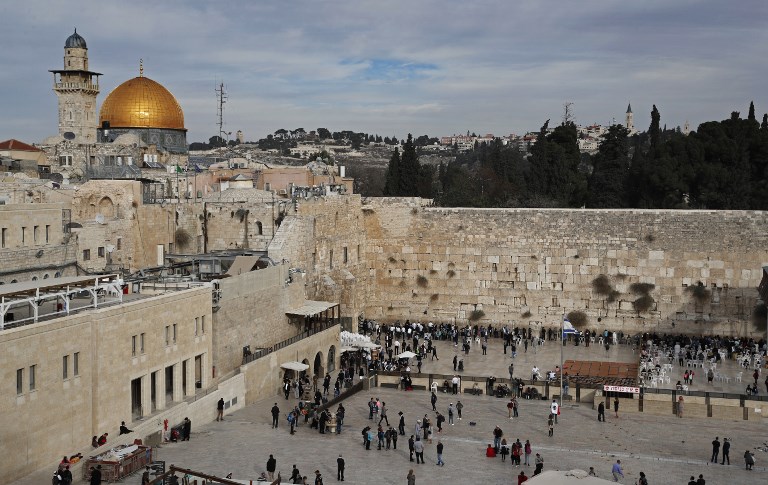 A general view shows the Western Wall (R) and the Dome of the Rock (L) in the Al-Aqsa mosque compound in the Old City of Jerusalem on December 5, 2017.
The EU’s diplomatic chief Federica Mogherini said that the status of Jerusalem must be resolved “through negotiations”, as US President Donald Trump mulls recognising the city as the capital of Israel. / AFP PHOTO / THOMAS COEX

Ruling Progressive Party of Maldives (PPM) has called on US president Donald Trump to renounce his recognition of Jerusalem as the capital of Israel, calling it a great blow to the plight of Palestinians.

Following Trump’s official announcement on Jerusalem, PPM released a statement late Wednesday, describing the move as a deliberate tribulation for Palestinians and a betrayal to the Islamic world, which would close the door to establish peace in the Middle East.

PPM condemned Trump’s decision as an absurd and uncouth act that defies several international laws which ensure peace and security for humanity. The ruling party also expressed fears that hopes have been dashed for progress in the long drawn-out peace talks over the Palestinian-Israeli conflict.

The ruling party condemned Trump’s decision in the strongest terms, proclaiming that Trump showed no respect for the values of Islam and humanity, as well as the former presidents of the US who had maintained ambiguity over the disputed status of Jerusalem. PPM also highlighted that the majority of world leaders have voiced their disagreement with Trump’s move, and called on the US government to renounce its decision.

With Trump’s announcement, the US became the first country to recognize Jerusalem as the capital of Israel ever since the latter was formed in 1948.