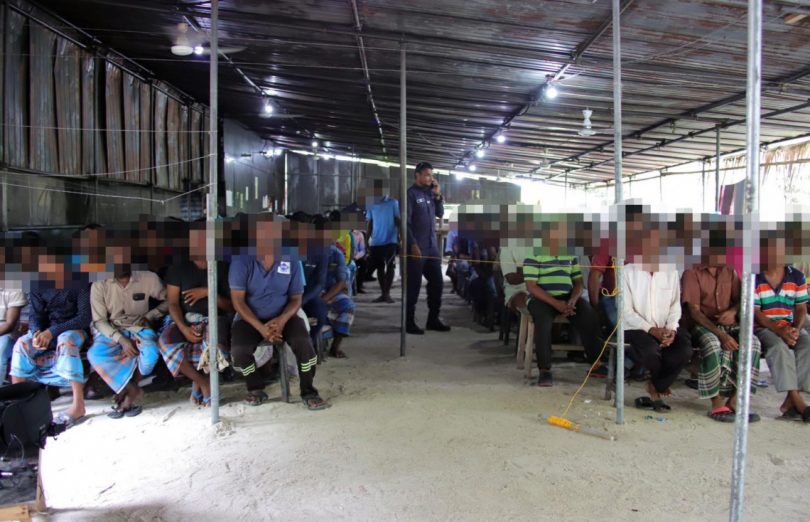 PILC, which is providing pro bono legal assistance to the expatriate staff, filed a request at the Employment Tribunal on July 18, seeking compensation for the unpaid employees of RIX Maldives Pvt Ltd and arrangements for their repatriation.

In a letter addressed to Maldives Police Service, Maldives Immigration and the Ministry of Economic Affairs, PILC expressed concerns that the whereabouts of the expats are unknown, as it would affect the ongoing case lodged at the Employment Tribunal.

Noting that PILC had the Power of Attorney over the workers, the law centre requested all relevant authorities to inform them before taking any action regarding this matter, such as repatriating the migrants to their home countries.

The law centre stated that they had repeatedly requested authorities to reveal information about the Bodufinolhu workers, but no institutions have provided an answer as of yet.

Although PILC received information that the migrant workers were handed over to the Economic Ministry, the law centre noted that no authority has neither confirmed nor denied it.

Local media Mihaaru reported that police escorted 174 expats off Bodufinolhu on Saturday, two days after water and electricity was cut off to the island.

According to Mihaaru, the essential services were cut off when developer Seal Maldives, managing the services, left the island.

Lawyers representing Seal Maldives clarified that the water and electricity were cut off due to a delay in receiving the permit to fix the issues with the water plant and generator.

Mihaaru further reported that the services were resumed when police agreed to take the expat workers off the island.

RIX claimed that Seal Maldives cut off the water and electricity on Bodufinolhu, in addition to preventing the expats who travelled to Thulhaadhoo for food from getting back on the island.

Moreover, RIX stated that the matter was reported to the Human Rights Commission of Maldives (HRCM) and police, although police did not take any action against the violations of human rights.

The state assumed custody of the migrants after RIX Pvt Ltd refused to claim responsibility for the expatriate workers over alleged misidentification of the company, dodging Thulhaadhoo Magistrate Court‘s order for RIX to extradite the expatriates from Bodufinolhu as per a request from Seal Maldives.

In 2019, Seal Maldives had contracted the construction work of Bodufinolhu, which is being developed as a luxury resort, to RIX Pvt Ltd, a company owned by the parliamentary representative for Shaviyani Atoll’s Milandhoo constituency, Ali Riza. Following the hostage situation, both companies issued conflicting statements regarding their respective contractual roles concerning the expatriate workers.