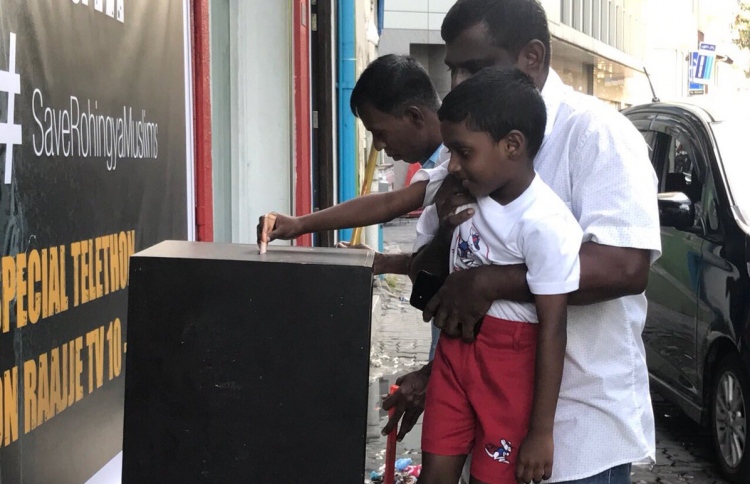 Local television channel Raajje TV announced that it has raised over MVR 1 million in less than 12 hours from capital Male City alone to relieve the plight of Rohingya Muslims who are facing persecution in Myanmar.

Raajje TV’s COO Hussain Fiyaz Moosa confirmed on Monday that the company received donations of over MVR 1 million in Male from 2:40 p.m. Sunday afternoon until midnight. The donated funds include both cash and deposits in a special account opened by Raajje TV for the cause.

This amount does not include donations to fund boxes Raajje TV placed in various islands or the donations made via SMS.

Raajje TV has placed boxes in six islands to raise funds for the Rohingya, while more boxes are to be placed in some other islands on Monday as well.

According to COO Fiyaz, Raajje TV’s fund boxes were kept in populous spots across the capital, such as ferry terminals, Olympus Cinema, restaurants, as well as a box outside Raajje TV’s main office.

While over a million Rufiyaa has been raised in Male, Raajje TV has so far recorded over MVR 50,000 in Laamu atoll Gan island and over MVR 45,000 in Baa atoll Kamadhoo island as well.

“This is beyond anything we expected. Though Raajje TV kept fund boxes in the islands in partnership with the island councils, this is truly the magnanimity of the citizens,” said COO Fiyaz, noting that some individuals and companies have donated amounts that number in the hundred thousands.

The company has also extended the fundraising event until midnight on Tuesday, from its previous deadline of 12:00 a.m. on Monday.

The funds are to be delivered to the Rohingya in the name of Maldivians via an aid group.

Fiyaz assured that Raajje TV will reveal the total amount of funds raised in the event. He added that Raajje TV has contracted an audit firm to carry out the process as transparently as possible.