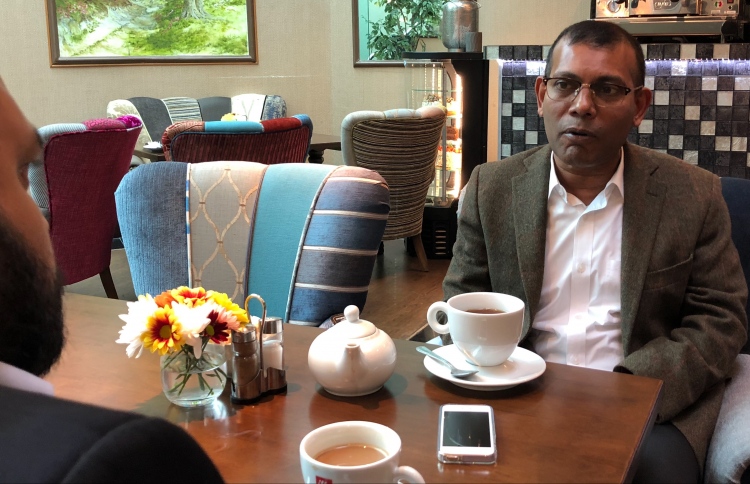 Former president Mohamed Nasheed expressed confidence that the current discussions between the United States and India about the Maldives’ political turmoil would pave the way for him to run in the presidential elections next year.

Nasheed made the declaration in an interview to Mihaaru in London on Tuesday. He declared that, in connection with the US-India talks, opposition political leaders that are currently imprisoned must also be released.

“Whether I run or not is a whole other story. We (main opposition Maldivian Democratic Party) are with the joint opposition, and so we must reach a decision together. Currently, MDP and I want a way for the united opposition to go forward as one,” he said.

Touching upon the joint opposition’s plan to select a single candidate for the upcoming presidential elections, Nasheed assured that MDP will put forward its candidate after a primary.

“The one from MDP to go for the joint opposition’s [election] will be one chosen from the primary. MDP will not go against its charter,” he stated.

Despite being convicted to 13 years in jail for the arbitrary detention of a judge during his regime, Nasheed maintained that he would be able to run in the Presidential Elections 2018.

“I’m confident that I would be able to run, but the [joint opposition] parties must decide on how we proceed.”

He proclaimed that the elections can be considered free and fair “only if we’re able to run”. He said that if incumbent president Abdulla Yameen did otherwise, it “would be very difficult for the elections to be fair”.

“Can beat president Yameen either way”

Nasheed revealed that he had shared his thoughts on the upcoming presidential elections with the national council of MDP. The wisest decision, he noted, would be for the joint opposition to put forward a single candidate.

However, Nasheed proclaimed that the joint opposition would be able to defeat president Yameen whether they put forward a single candidate or multiple ones.

“We can beat him either way. The way I see it, even if [opposition parties] run separately, we’d go to a second round. In that case, if there is a way for us to remain united we’d do so. Instead of going to multiple rounds, we can finish this in one shot.”

Nasheed further claimed that he can beat Yameen on his own. However, he stated that he cannot bring about the reform envisioned for the Maldives on his own. Highlighting the judiciary, police and military, he said that each and every institution must be reformed.

One year for an interim president

Nasheed had previously called for an interim presidency in 2018, a call which MDP and Jumhoory Party of the opposition coalition are in favour of. In his interview, Nasheed declared that the interim presidency should not last longer than a year and that all the reform must be accomplished within that period.

He stressed the importance of the joint opposition reaching an agreement over the candidate for the elections, and the candidate’s mandate after a successful election.

“We also need to agree on how to end the candidate’s regime, in addition to running for the parliamentary elections in 2019. This is the framework I have in mind now,” he said.

When asked whether MDP has a candidate in mind for the elections, Nasheed replied that the party members’ response would be himself.

“There are a lot of reasons why they’d say it should be me. Instead of looking at the person for now, I’m saying we should decide on policies first. How to elect that candidate? What should be done? How long should they be in office? First we need to reach an agreement.”

Nasheed added that should the joint opposition choose him as the candidate, then he too would stay as the interim president only for a year.