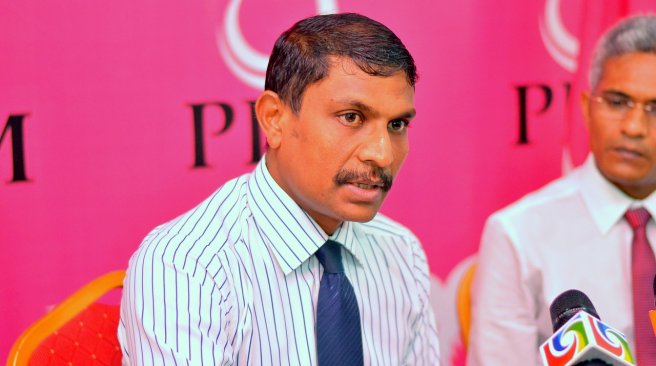 The original Dhivehi article was published on Mihaaru.com website on 28th September 2017.

When the recently released audit report revealed that Fenaka Limited had purchased fuel higher than STO’s selling price – MVR 1.50 per litre, in a way designed to benefit some parliament members, proved how selfish the accused MPs are. When Fenaka purchases fuel for powerhouses in islands at higher prices, it leaves the Islanders forced to pay extra for their bills.

What Fenaka has carried out in collaboration with some MPs is what some people have described as a direct slap on the faces of feeble citizens, who had been pleading for the lowest possible power bills.

It had been surfaced that powerful members that represent PPM party had stakes in companies formed in late 2013 and early 2014. Companies that had been around for a long time had also partaken with Fenaka’s fuel trade business. Those companies purchase fuel from State Trading Organization (STO)‘s Fuel Supplies Maldives (FSM) at a cheap rate. However, they sell to Fenaka at a much higher price than the price they will get if it purchased directly from FSM.

‘They (MPs with stakes at the alleged companies) buy from FSM at a very low price. But Fenaka is made to purchase fuel oil at a high price. That’s how it happened,’ said a senior official from Fenaka who preferred to remain anonymous.

It had previously also surfaced that through Fenaka some MPs and their close people were involved in these fuel transactions. Later it became public knowledge. However, this got officially confirmed after the release of the report by Auditor General.

The report says that in 2014, private parties had sold 16 million litres of diesel at a rate higher than what was by FSM to Fenaka. In 2015, 10 million litres of diesel was purchased at a higher price. With this total of 26 diesel litres purchased, Fenaka paid 21.8 million Rufiyaa in excess. Even though, the report does not disclose the names of the parties involved, it is positive that those involved are related to MPs who had stakes in them.

As per the report, FSM had offered the same rate to supply diesel for all powerhouses of Fenaka except for those in Addu Atoll. However, some private parties sold diesel to Fenaka at different rates for different islands. Thereby increasing the price of diesel when it reaches the powerhouses in the islands.

Fuel-related another big scandal was also was highlighted in the audit report. That is, without checking prices from others, awarding fuel supply to a single company and purchasing 26.2 million Rufiyaa worth of diesel only through them, to supply to powerhouses in Thaa Atoll from 2014 and 2015.

If a litre of diesel exceeds MVR 8, a fuel surcharge of 3 laari is applied for every 10 Laari higher, Therefore, when FSM was offering fuel at a low price, when Fenaka purchased at a higher rate from companies with MPs stake in, the bills will be higher.

‘If the purchasing price of fuel rises then fuel surcharge will automatically complement the rise. That’s why household bills had risen,’ a Fenaka official said.

Accused MPs details must be disclosed

MDP’s parliamentary group’s Deputy Leader Rozaina Adam said when MPs are accused of being involved in such fuel businesses, and when the audit report does not reveal the details of those companies, those perpetrators are being protected.

‘From the audit report, we cannot tell which companies the fuel was purchased from. In the past, all audit reports disclosed all details including the names. I call on the Auditor General to reveal those companies,’ said Rozaina who had recently been urging for low water, and electricity bills, as islanders are subjected to massive utility bills.

A media official from Audit Office said they no longer reveal details on public reports. However, all the details are shared with the concerned authorities.

When Thaa Atoll has come up with the report, it is likely that some people might point finger at Vilufushi Constituency MP Riyaz Rasheed, who had been doing fuel business for a long time. However, he claims that the audit report is not implicating about Meridium company where he has a stake.

Riyaz said that MPs involved fuel business is not an issue. He also said that Fenaka has purchased fuel at a price available for those atolls. Fenaka was sold fuel at a higher price as it was increasingly difficult to get payment for the fuel bills.

‘It is not easy to collect payments from Fenaka. We have to camp and wait there.’

Riyaz also criticised Fenaka for purchasing fuel only through FSM for islands powerhouses. He said that FSM does not have the capacity to supply fuel to all the islands as required.

‘When an island’s powerhouse runs out of fuel, fuel is not orderly replaced. How can Fenaka’s MD remain idle when the fuel runs out,’ said Riyaz.

Regardless, when fuel is available at a cheaper rate to buy at a high price is a disturbing matter. Especially when bills are hiked as a result, it is the helpless impoverished citizens who ultimately had to bear the burden of it. Nonetheless, this time some MPs opportunistic ways has exceeded the welfare of the citizens.

By selling fuel to Fenaka all benefits are to those MPs, the sufferings are to the citizens.