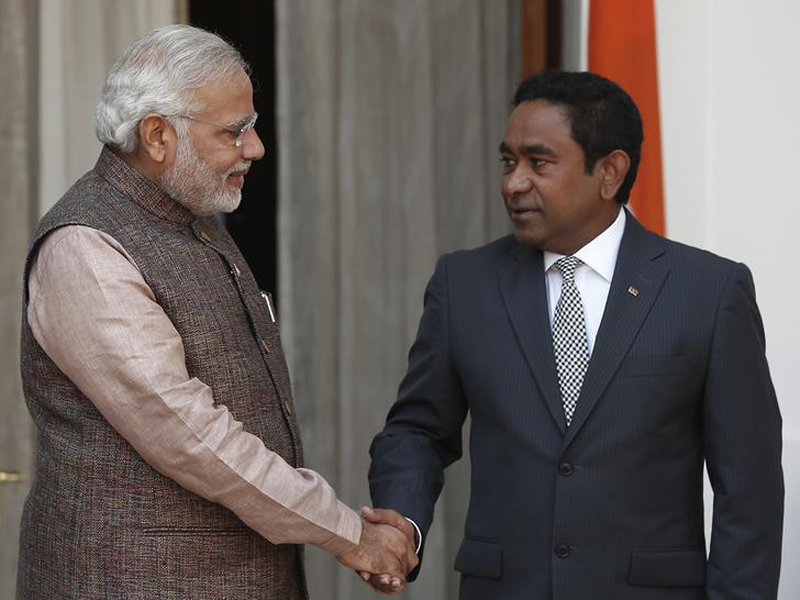 NEW DELHI: Amid growing concerns here over an open display of hostility against India in the Maldives, Male seems to be finally reaching out to the Indian government. It is currently discussing a high-level bilateral visit from India which it hopes will help calm frayed nerves on both sides.
Tension seemed to have peaked last week after a pro-government newspaper described PM Narendra Modi as anti-Muslim and India as an enemy nation. The modalities of the meeting are being worked out and the visit is expected to take place early next month.

President Abdulla Yameen has now denied that the editorial reflected his government’s position in any way and called India “closest friend” and ally. While the Maldives recently signed an FTA with China, Yameen said his government was discussing the same agreement with India.

Indian officials believe that the situation is really not as alarming as it is being made out to be.

After Maldives signed an FTA with China and rushed it through the Parliamentary approval process, there were 2 other instances which were seen as a snub to India. First, Male suspended 3 local councillors for having an unauthorised meeting with the Indian ambassador, Akhilesh Mishra, and second, the editorial in the pro-Yameen newspaper which, while describing India as an enemy, called for Male to find a new best friend in China.

In an official statement though, President Yameen reiterated that his administration would never entertain negative sentiments towards India, highlighting that Indian assistance formed an “invaluable contribution to the Maldives — further adding that the government was currently working towards a free trade agreement between the Maldives and India.”

The statement also mentioned the FTA with China with Yameen saying that it would bring several opportunities to the country.

India believes that even as the Maldives continues to court China, it won’t affect the strategically located nation’s ties with India or dilute in any way its officially stated India First policy.

After the Maldives FTA with China, India had said that it expected Male to be sensitive to its concerns. “We should look beyond these developments and we should have diplomatic discussions between the two sides to address any issue between the two countries,” MEA spokesperson Raveesh Kumar had said.

India has also pointed to a tweet by Maldivian foreign minister Mohamed Asim earlier this month in which he had said that relations with India were time-tested and based on people to people contact and cooperation in several sectors. “We remain committed to further enhancing and strengthening existing ties,” Asim had tweeted.

The Maldivian opposition, however, believes that India has been too soft on Yameen and that more “robust corrective measures” are required from India to deal with contentious issues like Yameen’s China policy and also the rising radicalisation in the archipelago.

Opposition leaders like Mohamed Nasheed and Maumoon Abdul Gayoom had come out strongly in support of India after the anti-India editorial was published. “I condemn the article…that brands India as an enemy of Maldives. Outrageous! No Maldivian in his right mind would subscribe to such views. India has been and remains a very close and trusted friend of Maldives,” Gayoom had said.