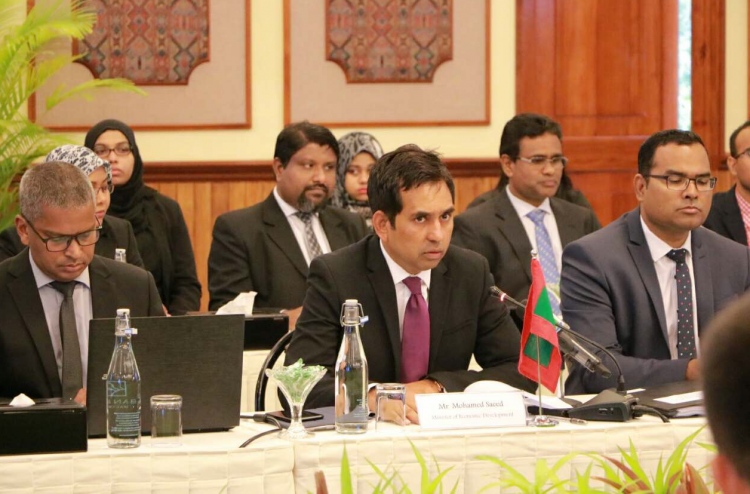 The Maldives’ government on Wednesday decided to enter the long-discussed free trade pact with China, and submitted the proposal to the parliament for review.

The president’s Cabinet ministers made the decision to sign the free trade agreement with China at a meeting held earlier in the day. The proposal was submitted to the parliament at a special sitting that was abruptly put together for Wednesday afternoon. The government’s proposal was forwarded to the Committee on National Security for review.

The Maldives has been in talks with China regarding a free trade pact since 2014. Speaking to the press after the Cabinet meeting, economic minister Mohamed Saeed declared that the agreement would be an incredible boost to the fisheries industry and tourism sector.

Saeed noted that ever since the Maldives graduated from the United Nations’ list of Least Developed Countries (LDC) to the status of a Developing Country in 2011, challenges have increased for the island nation’s fish exporters. Most notably, the prices of fish products spiked due to the duties charged from fish exports.

Economic minister Mohamed Saeed (R) signs agreement with China at the launching of the free trade negotiations between the Maldives and China on September 8, 2015.

“That was when [president Abdulla Yameen] decided to seek an easier, more profitable means of exporting fish for fishermen. The solution we arrived at is entering a free trade pact,” said Saeed.

The minister elaborated that the agreement would open the doors for the Maldives to trade fish products in the “world’s biggest consumer market” without duty.

The Maldives has also concluded free trade talks with Hong Kong while invitations to sign free trade agreements have been extended to the US, UK, European Union and Japan. Saeed expressed hopes that the countries in question will convey interest in such a pact.

The parliament will take a vote on the free trade pact with China at another sudden sitting that is arranged for Wednesday night. The two “special” sessions for Wednesday were scheduled at short notice, soon after the parliament ended its third term and went into a two-month recess earlier that morning.

Under the Maldivian Constitution, any treaties and agreements with foreign states and international organisations, which impose obligations on citizens, must be approved by the parliament before the president can ratify them.