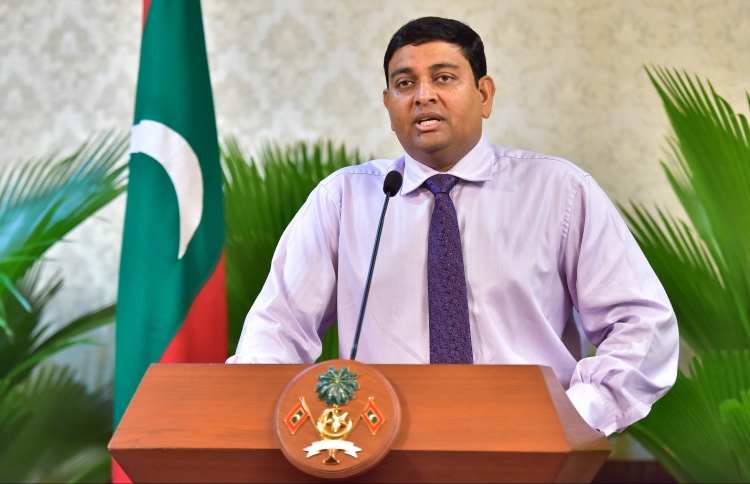 President Abdulla Yameen on Wednesday again extended invitations to commence all-party talks but without prior conditions from any sides.

Speaking at a press conference at the President’s Office, the state representative, Minister of Fisheries and Agriculture Mohamed Shainee declared that the government is looking to hold the talks again in order to discuss the concerns of opposition parties which have been reported by the media lately.

Assuring that the administration is fully prepared to meet with all the political parties and sincerely consider their opinions, he announced that the president has also extended the invitation to his half-brother, former President Maumoon Abdul Gayoom, unlike the previous times as the latter is currently working with the joint opposition.

In a letter sent to all the political parties and former President Maumoon on Wednesday, the President’s Office requested the parties to submit in writing their suggestions and amendments for their desired reform within the next seven days.

The letter also noted that the government has on multiple counts taken the initiative to call for all-party talks previously in order to overcome differences of opinion, and to move forward with the development of the nation and unity of the Maldivian people. However, the talks had fallen through due to prior conditions put forward by opposition parties, which the state had refused to meet.

“We requested them to meet with us without putting any conditions on the table first,” said the fisheries minister, who repetitively stressed that no prior conditions will be accepted for the talks.

The main condition put forward by the opposition parties in the past was to allow their convicted leaders, who are serving jail sentences, to be allowed to participate in the talks. However, the government had refused to meet the condition each time and Minister Shainee on Wednesday was quick to explicitly state that the situation remains unchanged.

He pronounced that any political leader that is incarcerated or convicted and about to begin a prison sentence will not be allowed to join the all-party talks.

Considering the circumstances, Mihaaru inquired the minister as to what level of party officials that the government is looking to hold discussions with, to which Minister Shainee dryly replied that political parties do not revolve solely around their leaders. He stated that the talks can proceed with any representatives appointed by the parties.

Not a solution for all “podium talks”

Tamrat Samuel (L), senior advisor to the UN department of political affairs, meets with a government delegation regarding the all-party talks. PHOTO/TWITTER

In response to Mihaaru’s inquiry whether the government is prepared to solve all the concerns of the opposition which include the gratuitous prosecution of politicians, infringement of the independence of institutions, government influence over the judiciary and control over the parliament, and violation of the Separation of Powers, Minister Shainee said that solutions cannot be found for every comment made at an opposition podium.

“We’re saying to bring all those topics to us [for discussion]. But we don’t believe that any of the issues [Mihaaru] mentioned involves the government committing a false act or influencing an institution. But if the opposition sees the situation as such, there should be proof of that,” he said.

The minister declared that with such proof, the government is prepared to discuss and make amendments and reform if necessary.

“But if the government is to react to everything that is said at podiums or published in the news, I think [the government] will have to stop much of its functioning just to focus on those,” he added wryly.