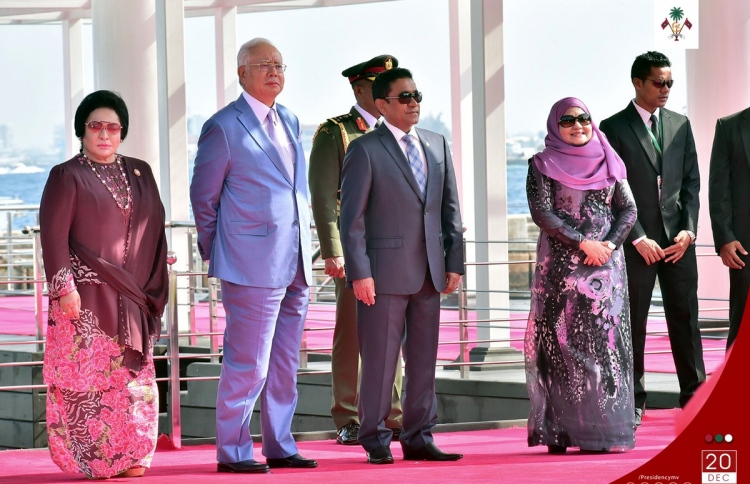 The governments of the Maldives and Malaysia signed four key agreements on Wednesday.

The signing was held at the President’s Office after president Abdulla Yameen and first lady Fathimath Ibrahim hosted the official welcome ceremony for the prime minister of Malaysia, Najib Razak, and his wife, Rosmah Mansor, early Wednesday.

According to the President’s Office, the first agreement was on the establishment of a Maldives Cultural Centre in Malaysia. The MOU was signed by the Maldives’ foreign minister Dr Mohamed Asim and Malaysia’s deputy foreign minister Dato’ Sri Reezal Merican Naina Merican.

The second MOU was on cooperation between the two countries in the field of firefighting and rescue training, signed by the Maldives’ defence minister Adam Shareef and Malaysia’s local government minister Tan Sri Noh bin Haji Imar.

The final MOU was on cooperation in the field of health. The agreement was signed by the health ministers of the Maldives and Malaysia, Abdulla Nazim and Datuk Seri Subramaniam K V Sathasivam respectively.

The President’s Office also revealed that Yameen and Razak held a private meeting prior to the signing ceremony. Official talks were also held between the governments of both countries.

The Office did not disclose further details on the agreements and talks.

PM Najib Razak and his wife are on an official visit to the Maldives at the invitation of president Yameen and first lady Fathimath Ibrahim. They arrived in the Maldives on Tuesday afternoon. It marked the first time for a prime minister of Malaysia to visit the Maldives in the past 33 years. The last PM to visit was Mahathir Mohamed in 1984.

Yameen has visited Malaysia twice since he came to power in 2013. The president had discussed various avenues in which burdens could be eased for Maldivians, who often go to Malaysia for higher education, medical treatment and vacation. A notable result of these discussions is the Malaysian government’s decision to extend on-arrival visas for Maldivians from 30 days to 90 days.