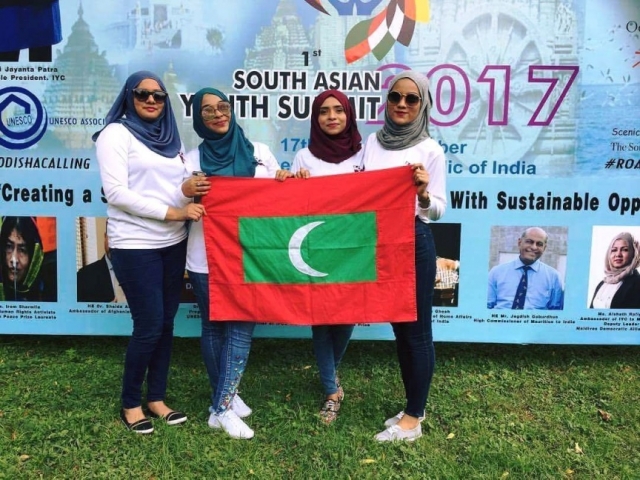 A group of Maldivian delegates at SAYS 2017 posing for a picture with the Maldivian flag in Bhubaneswar, India on September 16, 2017.

Maldives, along with three other countries have expressed interest in hosting the second edition of the South Asian Youth Summit (SAYS), which will be held in 2018.

The 1st SAYS is currently underway in Bhubaneswar City, India. Youth ministries of all eight South Asian Association for Regional Cooperation (SAARC) member countries, expect for Pakistan are participating in the event.

Jayanta Kumar said that four South Asian countries have expressed interest in hosting the Summit, including Maldives. He said Maldives was one of the countries in the lead to host the Summit.

The other countries which have expressed interest in hosting SAYS 2018 are Sri Lanka, Bangladesh and Nepal. The country which will be hosting the next SAYS will be announced during the closing ceremony of SAYS 2017, this Wednesday night.

The organization from Maldives which has expressed interest in hosting the next SAYS is Regional Alliance for Fostering Youth (RAFY) NGO. RAFY is IYC’s official Maldivian member NGO.

Founder and President of RAFY NGO, IYC Ambassador Aishath Rafiyya has provided confirmation to “Sun” that the NGO has expressed interest in hosting SAYS 2018.

Meanwhile, Maldivian government’s representative at SAYS 2017, Director General of Ministry of Youth and Sports, Ali Zaki Ahmed stated during the high-level meeting held between officials from youth ministries of participating countries on Tuesday that the Maldivian government welcomed all events held in Maldives to empower youth.