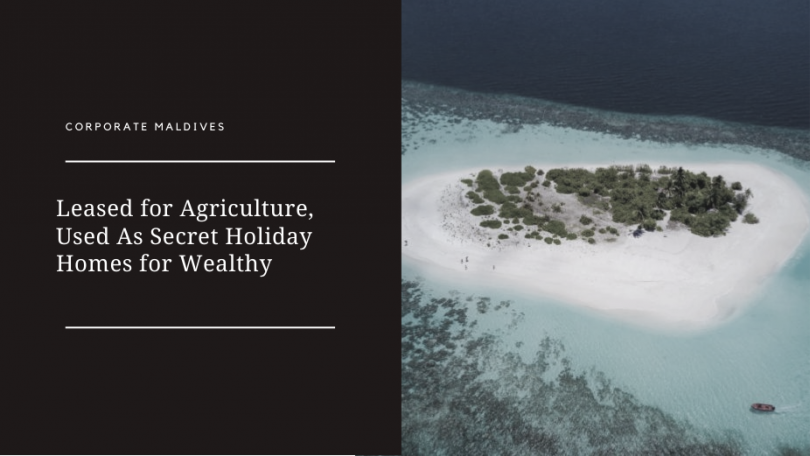 Uninhabited islands in the Maldives were being leased to individuals for agricultural purposes for many years which, however, is being used as holiday homes for the wealthy.

During the session held on the Monday regarding the leasing islands for agriculture, the Speaker of the Parliament Mohamed Nasheed stated that the People’s Majilis has advised the government with clear research in amidst the COVID-19 pandemic where it would not be a wise decision to further lease the islands for agriculture.

The uninhabited islands were always leased to individuals long before the initiation of the tourism industry in the Maldives. Hence, in order to visit the island nearby, it is common to get permission from someone while the formal details were not available to prove any claims or authenticity. Since ages, individuals who claim authority over the islands are usually the wealthy businessmen, ministers and other senior government officials or those with political influence.

The islands are handed over for agriculture and other purposes after announcing publicly usually to those who are close to the island chiefs or those who work under them which has never changed, although the times have changed with increased importance for tourism-related purposes. The speaker further outlined that islands are handed over even now as well for agricultural purposes while it is certain that only a few of over a hundred islands are being used for activities that benefit the agricultural industry or the economy.

In response to the words of the Minister of Fisheries, Marine Resources, and Agriculture, Honorable Zaha Waheed during Monday’s session, the Speaker of Parliament stated that if the size of the island is 27 or 30 hectares, it is just left as a holiday home which is not feasible. He further questioned whether such handing over of islands would benefit the government or the society in any way and that although some islands have grown chilli, cucumber, or tomato, the vast majority of the islands are still being used as holiday homes as old times which are controlled by those individuals with wealth or influence. An expert in the agricultural industry stated that considering the high costs involved and fierce competition in the market with the possibility of being able to import agricultural products with much lower prices, it will not be feasible to do agricultural products in uninhabited islands.

The government has recently announced 6 uninhabited islands to be leased for agriculture. Besides, there is no successful model to execute agriculture on the islands in the Maldives with barriers such as weather and having to transport the products across the ocean while having high costs to maintain and high transport costs. Hence, while bearing such costs, there is no way to reduce prices and compete with imported products. Thereby, it will be more successful if the agricultural activities can be done in inhabited islands and resorts with enough land where such successful examples include, AA. Thoddoo, K. Kaashidhoo, Sh. Kandoodhoo and other inhabited islands in H.Dh. Atoll with more land while Kuredhu resort in Lh. Atoll and other Crown and Champa resorts have been successfully conducting agricultural activities.

Nasheed further mentioned that the use of the islands as inherited properties of the businessmen in Male’ city has to be stopped and that it should be decentralized where more opportunities should be created for islands in the atolls to be well utilized to benefit the people in that atoll. Moreover, it should be well investigated to identify or estimate the profits that can be made from the agricultural islands which should be proved with evidence to the government.

No island should be left as a second home or holiday home to the wealthy. Therefore, no island will be sacrificed for the benefit of an individual like a resort with no benefit to society.