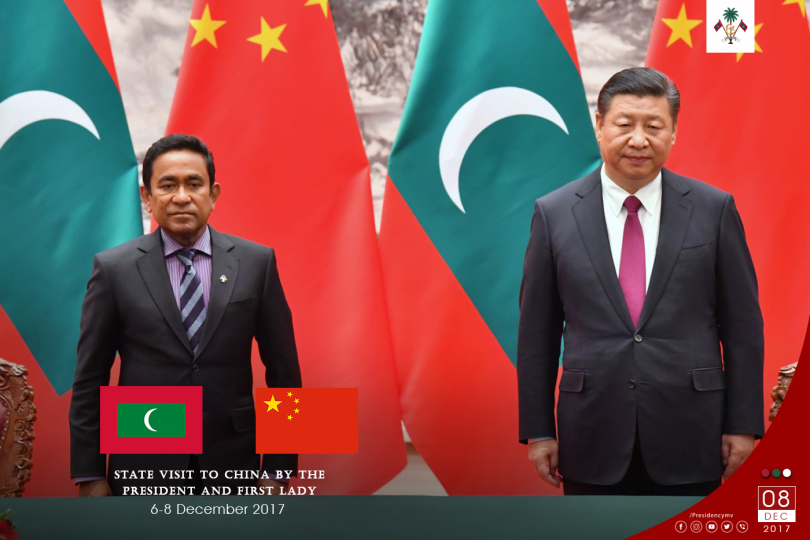 3.The Maldivian side warmly congratulated the Communist Party of China (CPC) on the successful conclusion of its 19th National Congress, and the confirmation of President Xi’s Thought on Socialism with Chinese Characteristics for a New Era as an action guideline of CPC by the Congress. The Maldivian side expressed its confidence that under the guidance of CPC Central Committee with Xi Jinping as the core, the Chinese people will move forward to achieving the two centenary goals and building China into a great modern socialist country that is prosperous, strong, democratic, culturally advanced, harmonious, and beautiful.

4.The Chinese side reiterated to deepen relations with the Maldives and other neighboring countries in accordance with the Five Principles of Peaceful Coexistence and principles of amity, sincerity, mutual benefit and inclusiveness and the policy of forging friendship and partnership with its neighbors, to build a community with a shared future for mankind and create a bright tomorrow for all.

5.The two sides agreed that ever since the establishment of diplomatic relationship 45 years ago, the two countries have been adhering to the principles of equality, peaceful coexistence and win-win cooperation, which has resulted to the remarkable development of the bilateral relationship. Viewing from strategic and long-term perspective, the two sides agreed to work towards elevating the existing China-Maldives Future-Oriented All-round Friendly and Cooperative Partnership to a new level.

6.The two sides reiterated their mutual understanding and support for each other on issues of core interests. The Chinese side adheres to the principle of non-interference in internal affairs, supports Maldives’ independent choice of development path which suits its domestic features and wishes Maldives economic and social development greater success. The Maldivian side reaffirmed its unwavering respect to the sovereignty and territorial integrity of China and reiterated its firm commitment to uphold its One China Policy, supports China’s position on Taiwan and Tibet and the efforts by the Chinese Government to realize national reunification.

7.The two sides held that the State Visit by Chinese President Xi Jinping to the Maldives in September 2014 was a milestone to China-Maldives relationship. Governments of the two countries will make common efforts to continue carrying out the consensus reached by the two Presidents and promote exchanges and cooperation in all areas, for the well-being of the two peoples.

8.The two sides agreed to maintain the momentum of high-level exchanges, deepen political mutual trust, expand exchanges at different levels between the two governments, legislative and judicial bodies, procuratorate authorities and parties, and increase dialogues on governance and anti-corruption.

10.The two sides exchanged views on promoting trade and investments. The Maldivian side agreed to facilitate investments by Chinese enterprises in the Maldives, while the Chinese side will encourage more competitive Chinese enterprises to invest in the Maldives and provide assistance within its capacity to Maldives’ social and economic development. The Chinese side invited the Maldives side to attend the China International Import Expo to be held in 2018 to which the Maldives side responded positively and expressed their wish to participate actively.

11.The Maldivian side appreciates the assistance and support by the Chinese side to the China-Maldives Friendship Bridge Project and the Expansion and Upgrading of Velana International Airport Project, the two most important flagship projects of the Government of the Maldives. The two sides agreed to ensure these projects be completed on time and in due quality.

12.The two sides held that the Free Trade Agreement Between the Government of the People’s Republic of China and the Government of the Republic of Maldives signed during the visit was a milestone in the development of China-Maldives economic and trade relations, which will further energize bilateral economic and trade cooperation, and benefit the enterprises and the people of both countries.

13.The two sides agreed to deepen cooperation on a wide range of areas including in the fields of marine environment, fisheries and tourism. The inaugural meeting of China-Maldives Joint Committee on Marine Cooperation will be held in due time. Law enforcement and security authorities of the two countries will enhance exchanges and cooperation on anti-terrorism, anti-narcotics, personnel training, mutual visits and other areas. The Chinese side will continue to encourage Chinese citizens to travel to the Maldives, provide assistance to the Maldivian side in tourism promotion in China and encourage Chinese enterprises to invest in tourism industry of Maldives. The two sides agreed to make full use of the Joint Meeting Mechanism to ensure the safety of Chinese tourists in the Maldives.

14.The two sides congratulated the successful completion of the commemorative activities of the 45th anniversary of the establishment of diplomatic relations between China and the Maldives, and agreed to further strengthen exchanges and cooperation in such areas as defense, technology, culture, education, press, sports, health, youth, women, welfare and local communication. The two sides will enhance cooperation on human resource development. The Chinese side is ready to provide more Chinese language training opportunities to the Maldivian side, and will establish Chinese Culture Center and China-Maldives Ophthalmology Center in the Maldives. China welcomed the establishment of the Maldivian consulate in Kunming.

15.The two sides agreed to further strengthen coordination and cooperation in the United Nations and on other multilateral fora, and enhance cooperation on global issues including climate change. China is ready to support the Maldives on adapting to climate change under the framework of South-South cooperation. The Chinese side welcomed the important constructive role played by the Maldives as Chair of the Alliance of Small Island States (AOSIS). Both sides agreed to promote regional connectivity, development and prosperity. The Maldives supported China’s effort to enhance its relationship with the South Asian Association for Regional Cooperation (SAARC).

17.The two sides expressed their satisfaction on the outcomes achieved as a result of the State Visit to China by President Abdulla Yameen Abdul Gayoom, and agreed that the visit was of great importance to further development of China-Maldives Future-Oriented All-round Friendly and Cooperative Partnership. President Abdulla Yameen Abdul Gayoom expressed his appreciation to President Xi Jinping and the Government and the people of the People’s Republic of China for the warm hospitality.