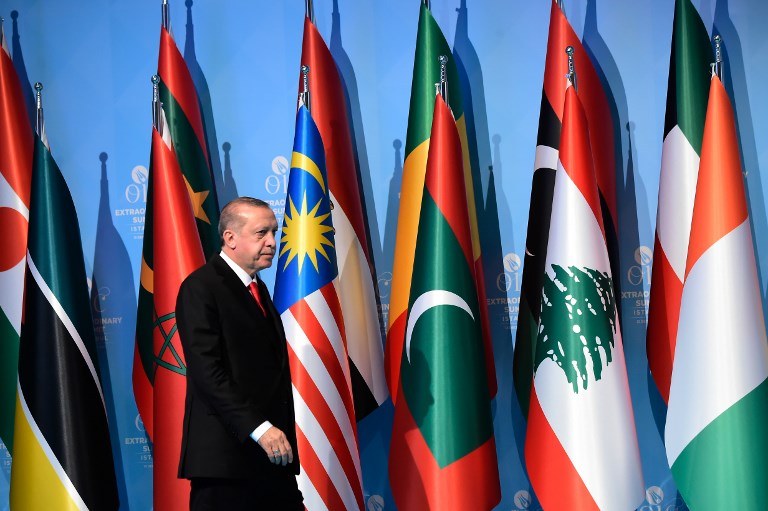 Turkish President Recep Tayyip Erdogan arrives to hold a press conference following the Extraordinary Summit of the Organisation of Islamic Cooperation (OIC) on last week’s US recognition of Jerusalem as Israel’s capital, on December 13, 2017, in Istanbul.
Islamic leaders on December 13 urged the world to recognise occupied East Jerusalem as the capital of Palestine, as Palestinian president Mahmoud Abbas warned the United States no longer had any role to play in the peace process. / AFP PHOTO / YASIN AKGUL

Israel’s occupation of Jerusalem and its pursuit in declaring Jerusalem as its capital is against all international laws, declared the Maldives at the Organization of Islamic Cooperation (OIC) Summit held in Turkey.

The Maldives also strongly condemned the move by the US to recognize Jerusalem as the capital of Israel.

Speaking as the head of the delegation representing the Maldives at the extraordinary OIC summit currently underway, housing minister Mohamed Muizzu warned that the US’ decision will have dire consequences on the region’s future peace, security and stability. He also highlighted that while Jerusalem is home to many sacred Islamic sites, Israel’s illegal occupation and resettlement projects are in violation of all international laws and United Nation’s Security Council resolutions.

He further stated that the Maldives supported the efforts undertaken by the Palestinian leadership in pursuit of a sovereign and independent state with Jerusalem as its capital. He further pledged to continue unwavering support to the Palestinian cause.

The summit presided by Turkey was attended by 57 Islamic nations, with the issue of Jerusalem as a focus.

US president Donald Trump had officially recognised Jerusalem as the capital of Israel last week Wednesday, which sparked outcry and backlash from all around the world. While Israel welcomed the move, it has been harshly criticized by several nations, including Saudi Arabia, Egypt, Jordan, the EU, UK, France, Germany and Turkey, with rising fears that it could trigger more violence in the Middle East.

Israel seized the largely Arab eastern sector of Jerusalem during the 1967 Six-Day War and later annexed it, claiming both sides of the city as its capital. The Palestinians want the eastern sector as the capital of their future state.