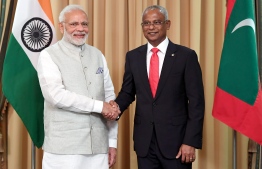 “India remains a beacon of hope the world over for its democratic values and contributions to peace and progress”, stated the president in his message.

Minister of Foreign Affairs Abdulla Shahid also echoed the president’s sentiment in his message of greetings to the Indian Minister of External Affairs Dr Jaishankar.

“Since the attainment of its independence, India has strived for the betterment of its people and, at the same time, shared its acquired expertise and rich experience with the rest of the world. Today, India stands as an enduring example of democracy and development, for the region, and the world”.

Highlighting that Maldives and India would mark 55 years of formal diplomatic relations in November, Minister Shahid stated that links between the two countries were more longstanding and would “continue to flourish”.

Furthermore, the foreign minister expressed confidence that both countries would continue to cooperate to address the challenges presented by the ongoing COVID-19 pandemic.