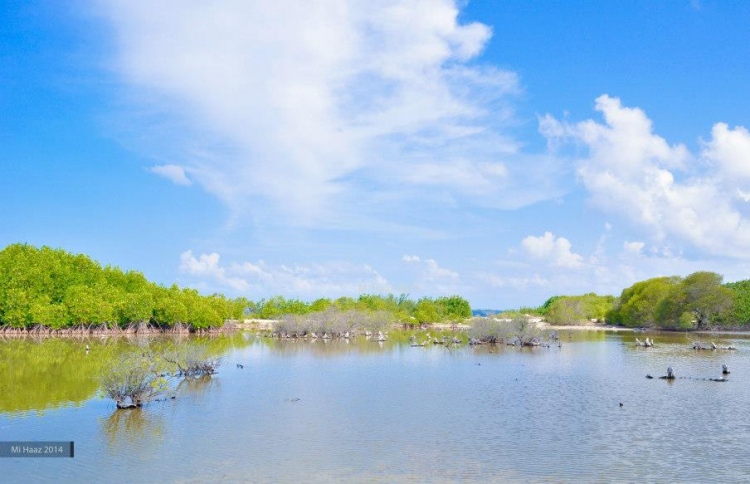 The endangered species that inhabit the mangrove in the island of Kulhudhuffushi in the northern Haa Dhaalu atoll will be relocated to a place with similar environmental conditions, the Environment Impact Assessment (EIA) for the proposed airport development project, has advised.

The government’s revelation that the wetlands will be reclaimed for the development of a domestic airport had sparked an outcry from the island’s residents, as well as environmentalists across the nation.

Mihaaru is aware that the Regional Airports authority under the Ministry of Tourism which oversees the development of the majority of domestic airports in the county, has since asked the Environment Protection Agency (EPA) to carry out the recommendations in the EIA.

The EIA estimates that the species can be moved within three to four months.

“[This] wetland area has been listed as an ‘environment sensitive area’ due to the unique environment features of the area,” the EIA conducted by Dr Zahid Hameed stated.

According to one environmentalist who works at UNDP, the Kulhudhuffushi mangrove harbours eight species listed on the IUCN Red List.

The EIA also notes that the “main impact is the permanent loss of habitat for the flora and fauna and loss of terrestrial vegetation and deforestation of part of the area allocated for runway and other facilities development.”

“The wetland area surrounding the mangrove acts as a natural catchment area for flood mitigation. If the proper drainage system is not established, the area will experience flood impacts,” the EIA stated about other implications of reclaiming the mangrove.

However, it also noted that there may be some socio-economic benefits of building an airport on the island such as employment opportunities and minimising the cost of transport to the capital Male.

The assessment had also suggested alternatives; however, it was quickly disregarded as developing an airport in Kulhudhuffushi was a presidential pledge.

“Other major alternatives include developing the airport in a different nearby island without such sensitive areas. This would mean Kulhudhufushi community will have to travel by sea to access the airport and has thus been rejected by the concerned Government agencies and a decision has been made to develop an airport by reclaiming Kulhudhuffushi Kulhi area, as airport development project has been a presidential pledge.”