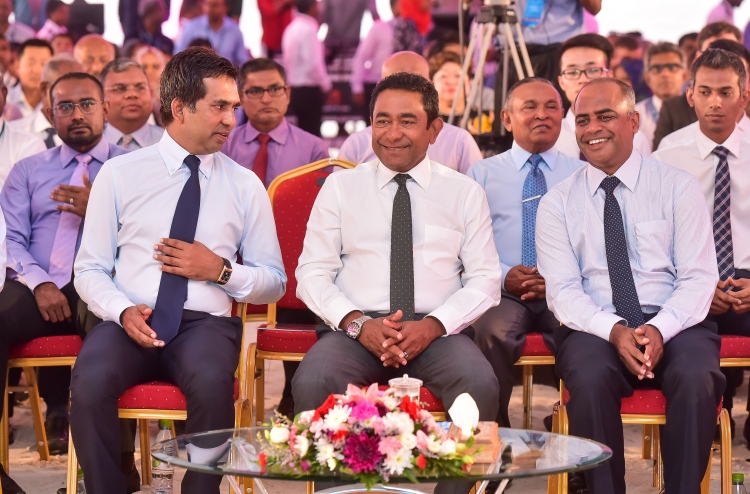 Members of opposition parties have slated the “rushed” free trade argument (FTA) as a pact that would sell off the Maldives to China. Claiming that the terms of the pact are not in the best interests of the Maldives, the opposition has alleged that the FTA would allow China to dominate the Maldives in terms of economy, and eventually challenge the Maldives’ foreign policy and sovereignty.

Minister Saeed, who had led the free trade talks between the two countries since negotiations began in 2014, declared that the opposition either does not understand what the pact truly encompasses, or is either deliberately spreading propaganda.

In his explanation to assert that the FTA would be most advantageous to the Maldives, Saeed reiterated that ever since the Maldives graduated from the United Nations’ list of Least Developed Countries (LDC) to the status of a Developing Country in 2011, the island nation’s fish exporters have been facing numerous challenges, most notably the price spike of fish products due to the duties charged from fish exports since 2014.

Saeed stated that signing free trade pacts then became a necessity. He highlighted that the Maldives had taken the initiative to extend invitations to China, Hong Kong, US, UK, Japan and countries of the European Union to enter into free trade.

“There were two challenges to [fish exporters]; one was increasing duties and the other was the procedures outside of duty fees. The simplest solution we found for both was to enter into bilateral free trade with countries.”

While China had begun to charge 15 percent as duty from Maldivian fish exports after the Maldives was upgraded to a Developing Country, the bulk of fish products from the island nation is not exported to China. However, Saeed explained that when the FTA comes into effect, China would not charge any duty from 296 out of 298 seafood items, which would directly benefit the Maldives.

“For example, if shrimp imported to the Maldives are cleaned and packed, that is a created value. That opens the opportunity for us to export it as a ‘packed in Maldives’ product to the largest market in the world. The same goes for lobsters,” explained Saeed.

He also countered the opposition’s claims that there is little demand for skipjack tuna and yellow fin tuna in the Chinese market. Declaring that the Maldivian fish products displayed at the Kunming Fair in China were “sold out in two hours” despite relatively expensive prices, Saeed said that the opposition’s talks stemmed from either true ignorance or attempts to invoke political turmoil.

The biggest fear raised by the opposition and public in the face of the FTA is that major entrepreneurs from China would start their own businesses in the Maldives and “dominate” the local trade and business scene.

Saeed addressed the concern, assuring that the FTA would not allow people from China to work in the Maldivian fishing industry or other local businesses.

Pointing out that the Maldives has a small market, Saeed explained that the government had clearly informed the Chinese administration that foreign businesses cannot work in the local scene under Maldivian law.

“There is no fear of that … Any undertaking prohibited to foreigners under the Maldives’ Foreign Investment Act will remain prohibited to China [under the FTA as well],” said the minister. “…We have business registration policies; formulae to protect small businesses. Protecting the trades of Maldivian people is the highest mandate of the government. People from other countries cannot start up ‘little shops on corners’ here; that is prohibited by our laws. Hence, [FTA] will not change any of that.”

Saeed went on to assure that the FTA would help to expand local businesses as well as enhance importation and exportation of cargo. Noting that the Maldives re-exports a lot of cargo, Saeed proclaimed that the archipelago is the ideal destination for cargo transits between Eastern and Western countries.

Another benefit Saeed highlighted is that the FTA would expand the financial sector of the Maldives, particularly by making easy money more accessible for locals interested in starting up small businesses.

Saeed noted that the biggest hindrance to the progress of businesses is the high interest rates of bank loans. However, the FTA would lower interest rates, he vowed.

“The financial sector was one of our priorities in this agreement, to establish a transparent system without any red tapes in the regulations. As a result, the banking sector would become very attractive for the Maldives.”

One of the downsides of the FTA, as highlighted by the opposition and public, is that the Maldives would lose the revenue earned via duty fees charged from imported Chinese products. The Maldives imports goods worth billions every year from China.

Man at a fruit stall in the Travellers’ Market, Male. PHOTO: NISHAN ALI/MIHAARU

The minister acknowledged the concern; he stated that the lost revenue would be compensated by expanding local businesses, and that the government has already done the calculations to verify its feasibility.

“Axing duties would be prove highly profitable to businesses. More jobs will be created. If the duty is lost as Import Duty, there would be other ways to recover that loss, but that won’t be necessarily through upping taxes. But the Maldives can become a business hub, God willing,” he said.

The economic minister also harshly called out on the opposition for trying to push the stereotype that “everything from China is fake” into public thinking. Calling it a deception, Saeed declared that China is a “high tech” country that develops state-of-the-art facilities and gadgets.

Saeed condemned the actions of the opposition, saying that their talks regarding the FTA are all aimed at creating a climate of fear among the public. He pointed out that the opposition had acted up similarly when the Special Economic Zones Act was put into effect and work began on the development of the China-Maldives Friendship Bridge between capital Male and airport island Hulhule.

“When the bridge’s platform was laid, they criticized that the bridge is too low. The opposition did not look to see that it was the framework laid for the actual bridge. When the first layer of [Velana International Airport’s new] runway was laid, they said the runway is too fragile. They didn’t bother to see that 12 other layers would be laid over the first one,” Saeed said as examples of the opposition’s past actions.

“The fear invoked by the opposition is the greatest challenge to the Maldives’ tourism. They say that there are religious extremists in the Maldives; that the Maldives is sinking. These are absolutely unforgivable acts. The opposition leaders are at the front line of slaughtering Maldivian industries.”

“They are the ones who sold the nation”

Firing back at the opposition’s claim that the FTA would sell off the Maldives to China, Saeed stated that any country would establish a trade relation with another country according to the policies of the World Trade Organisation (WTO). Hence, he said that the opposition’s talks are pointless and laughable.

“Who sold our water company (Male Water & Sewerage Company)? Who sold our airport (VIA)? This government had to pay USD 300 million to save the airport,” Saeed said, referring to the administration of former president Mohamed Nasheed, which had handed over operations of VIA to GMR Group of India. The contract was deemed debilitating to the Maldives and his successor, former president Mohamed Waheed, had broken off the agreement with GMR, after which incumbent president Abdulla Yameen’s government had had to pay GMR the compensation.

“Who sold Island Aviation [Services]?” Saeed continued. “They couldn’t create a national airline even within 30 years of presidency,” he said, referring to former president Maumoon Abdul Gayoom, who had been in power for three decades before he was succeeded by Nasheed as the first democratically elected president of the Maldives.

“The people speaking at opposition podiums aren’t in any position to speak of selling the nation.”

Saeed further highlighted that, by the end of former president Ibrahim Nasir’s regime, the now defunct Maldives National Shipping Ltd (MNSL) had boasted 55 boats that could load cargo of up to 500,000 tonnes. He said that the Maldivian economy had been powerful at the time.

“But the governments that came after were too weak-willed to take on that responsibility. Isn’t that how we lost our economic authority? Don’t make [the current government] the victim of the responsibility you failed to take!”

Saeed proclaimed that the FTA with China is the first transparent contract compiled by the Maldives to date. Stating that the government had discussed with people of various trades for the FTA, Saeed said that “not everyone can be brought to the table” for discussions.

However, he assured that the FTA will be made public after bilateral negotiations conclude.

The parliamentary national security committee had reviewed the proposal of the “Free Trade Agreement Between the Government of the People’s Republic of China and the Government of the Republic of the Maldives” behind closed doors, and had approved it in just 30 minutes last Wednesday. Later that night, the parliament had taken a vote on the FTA proposal, which was only attended by lawmakers of the ruling coalition. The FTA proposal was passed unanimously by the 30 lawmakers present at the special sitting.

The free trade deal with China will mark the first time for the Maldives to enter into such an agreement with an individual country. Previously the island nation entered into a regional agreement with South Asian Free Trade Area (SAFTA), which includes all the SAARC countries.