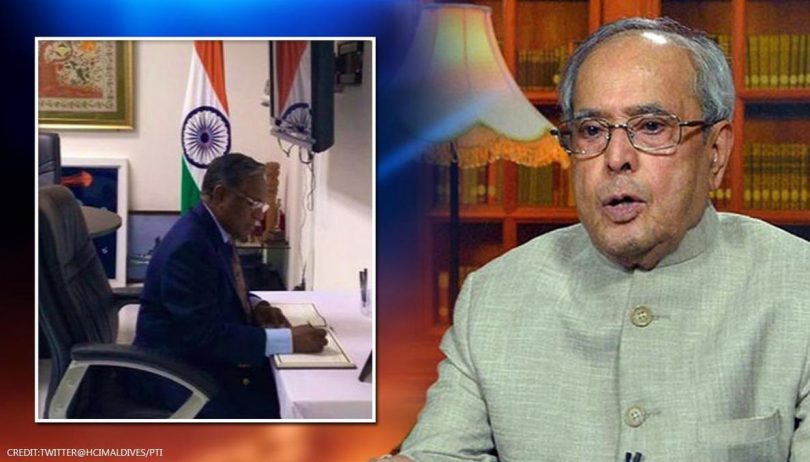 Following the demise of the former Indian President Pranab Mukherjee, Maldives ex-President Dr Mohamed Waheed on September 6 paid his respects by signing the condolences book at the Indian High Commission in the Maldives. Earlier, Waheed had condoled the death of Pranab Mukherjee, who passed away on August 31, by admitting that he was ‘very sad’ by the news. He had also sent his condolences to his family, Government of India and to all Indians as well.

Very sad to receive the news of the passing of Fmr. Indian President Shri Pranab Mukherjee. My condolences to his family, to the government and people of India. @HCIMaldives @PMOIndia

Former President Dr Pranab Mukherjee passed away on August 31 after being put in a coma post a successful brain surgery at Army Hospital (R&R) in New Delhi. The news was confirmed by his son – Abhijit Mukherjee, who thanked the hospital staff and doctors for their efforts. The 84-year-old was hospitalised on August 10 to undergo brain surgery for the removal of a clot and had tested positive for Coronavirus.

Since August 10, regular reports from the Army Hospital stated that the former President was in a deep coma and on ventilator support, remaining haemodynamically stable while being treated for a lung infection. While he had been operated for removal of a clot in the brain, he had also developed a lung infection and had a renal dysfunction apart from being infected with COVID-19 at the time of admission.

He leaves behind a rich legacy with his stint as India’s finance, commerce, defence minister, India’s President and veteran Congress leader. Known to be close to late former PM Indira Gandhi, he was elected to the Rajya Sabha first in 1969 and then subsequently in 1975, 1981, 1993 and 1999. While he was a thorough Congressman serving in the Congress Working Committee (CWC) for 23 years, his multiple stints as Finance minister ushered several major economic reforms boosting the Indian economy.