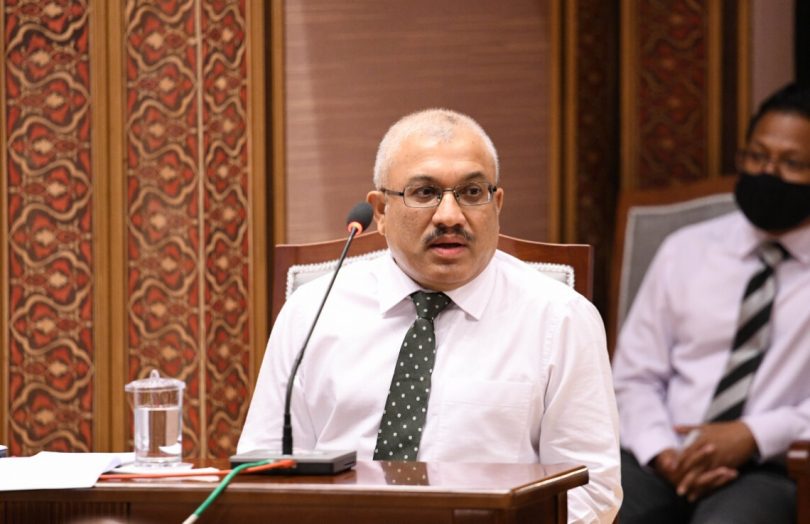 Jihad’s statements came during Tuesday’s parliamentary session, where he was summoned to discuss the government’s sovereign guarantees.

In response to questions posed by parliamentarians, Jihad noted that the loan to develop the Sinamale’ Bridge was taken as per the advice of former Minister of Finance Ahmed Munawar, who stated that the loans were unmatched to other sources.

“And so to my knowledge, I do not believe it would cause economical burdens on the state”, said Jihad, who was the first Minister of Finance and Treasury on the cabinet of the former administration, which was frequently reshuffled.

He further stated that all loans were acquired in reference to the country’s Gross Domestic Product (GDP) as well as the debt service coverage ratio, adding that the World Bank and the International Monetary Fund (IMF) were consistently monitoring the state of Maldives’ foreign debt.

Jihad also noted the current administration’s foreign debt to be higher than the standards observed by the financial institutions, stating that Maldives’ debt stands at 60 per cent relative to the GDP, as opposed to a maximum of 50 per cent debt-to-GDP ratio suggested by Jihad.

Ruling party-aligned lawmakers continued to hound the former VP and Munawar over Chinese loans, probing them to provide a solution to a possible scenario of debt defaults.

During the parliamentary meeting, the current Minister of Finance Ibrahim Ameer guaranteed that there was no possibility of the Maldives defaulting on its sovereign debts.

In much the same vein, the incumbent administration continues to borrow exorbitant amounts to facilitate mega-development projects as well as to finance the COVID-19 response.

According to the government, over MVR 3 billion has been borrowed for state-led efforts to tackle the pandemic to date.

Overall, the USD 1.5 billion acquired as loans from China is equivalent to 45 per cent of Maldives’ national debt. This includes loans from the Export-Import Bank of China, Industrial and Commercial Bank of China (ICBC) and China Development Bank (CDB).

The majority of these loan agreements were signed during the presidency of Abdulla Yameen Abdul Gayoom.

Statistics for the first quarter of 2020 show that Maldives’ national debt is currently at MVR 55.7 billion. Considering the financial burden of the COVID-19 crisis, this amount is expected to increase to MVR 70 billion, as opposed to the MVR 57 billion debt estimated for the 2020 budget.

Furthermore, economic repercussions caused by the COVID-19 pandemic are forecasted to increase state deficit to MVR 13 billion compared to the MVR 5.9 billion originally projected in the 2020 State Budget. The ministry also predicted an overall 115 per cent drop in GDP, along with 81.3 per cent for nominal GDP.