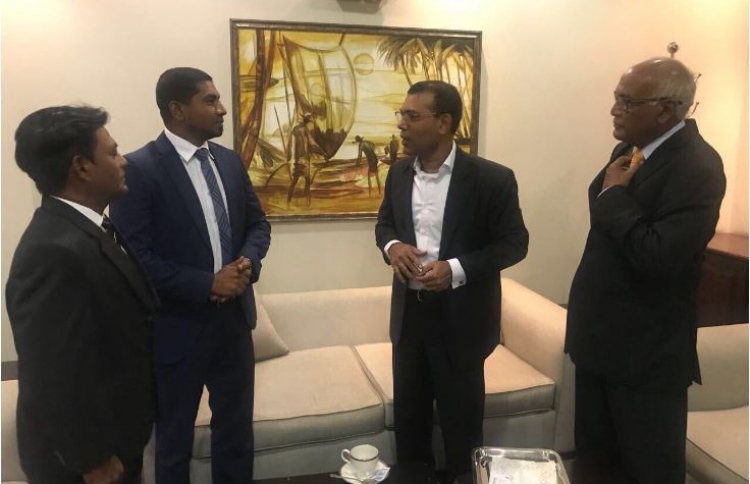 Spokesperson of the joint opposition and Galolhu South MP Ahmed Mahloof, who is currently in Sri Lankan capital Colombo, confirmed that Nasheed arrived around 2:00 p.m.

Ever since beginning his self-exile in the United Kingdom in January 2016, Nasheed has been visiting Sri Lanka often to meet up with members of the opposition coalition, hold political activities, and meet with foreign diplomats to discuss the political landscape of the Maldives.

The topic of Nasheed’s visits to Colombo was in an uproar recently, after the Maldives’ newly appointed envoy to Sri Lanka, Mohamed Hussain Shareef, declared that he would have Nasheed arrested and deported if he set foot in Colombo again.

“If a Maldivian authority requests me to detain and return Mohamed Nasheed back to the Maldives, I will,” Shareef had told a local television channel. “It’s very simple. They have to say, this is an individual who we are seeking. I’ll even go out to the street myself and do it.”

In an interview with AFP in September, human rights lawyer Amal Clooney had said, “Any attempt by a Maldivian diplomat to detain president Nasheed in Sri Lanka would constitute a violation of international law as well as Sri Lankan criminal law.”

She had called on the Sri Lankan government to ensure and protect Nasheed’s rights while he was on their soil.

Nasheed is already sentenced to thirteen years in jail under terrorism charges for the arbitrary detention of the High Court’s former Chief Judge Abdulla Mohamed during his presidency. Nasheed has since fled to the United Kingdom where he has been living under political asylum for over a year.

He is now facing a second terrorism charge over the arbitrary arrest and detention of incumbent president Abdulla Yameen Abdul Gayoom during his regime in 2010.

Meanwhile, several Maldivians had protested against the Maldivian government in front of the nation’s embassy in Colombo on Thursday, a day before Nasheed’s visit.

MP Mahloof and former foreign minister Ahmed Naseem also met with the European Union’s envoy to the Maldives earlier on Friday. According to Mahloof, they had discussed the upcoming presidential elections in 2018, freeing the Maldivian parliament, and the resolution EU had recently lobbied against the Maldives.

EU members who had debated the resolution that was submitted to EU parliament had accused president Abdulla Yameen’s government of infringing human rights and called on the union to slap certain sanctions on the Maldives.