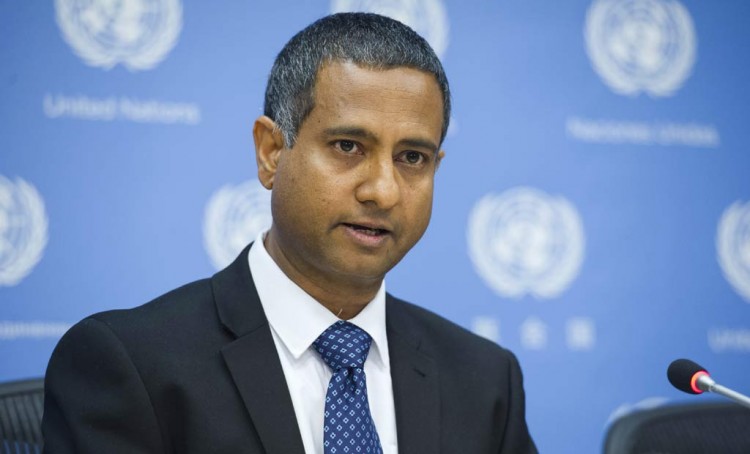 The original Dhivehi article was published on Raajje.mv website on 3rd January 2018.

Former Minister of Foreign Affairs Dr Ahmed Shaheed has said that he has no doubt that UN’s Human Right Committee will make a declaration this year stating that former President Mohamed Nasheed will be allowed to contest in this year’s Maldives presidential election.

Dr Shaheed, who is currently the Special Rapporteur on freedom of religion or belief, has tweeted on Tuesday night saying that when UN Human Rights Committee makes that declaration, President Abdulla Yameen Abdul Gayoom will be forced to not hold the election. However, on 19 September 2006, Maldives has signed a resolution saying that they will obey UN Human Rights Committee decisions, Dr Shaheed has said.

Dr Shaheed who is currently in the UK has said that Nasheed shall not be eliminated in 2018 in the same way he was forced to leave office on February 2012, and one should not eat the poisoned fruit.

Although Dr Shaheed has said this, Maldives government has turned their back to UN Working Group on Arbitrary Detention’s call to free Nasheed and former Defense Minister Colonel Mohamed Nazim. In relation to this while responding to a question by RaajjeMV, Dr Shaheed said on Tuesday night, that since Maldives has signed in the International Civil and Political Rights resolution to obey in the UN Human Rights Committee decisions, and that it is a different mechanism to that of UN Working Group on Arbitrary Detention, Maldives will be forced to respect the decision.

Dr Shaheed said that every citizen has the right to pressure the government. Since a country where the population is barely 400,000, it cannot stay without facing the results, especially after going against the international human rights laws.

Furthermore, while continuing to speak with RaajjeMV, Dr Shaheed has said President Yameen is trying hard to not allow Nasheed in the election because he knows he will lose. And he said that except the government getting ’embarrassed, exposed’, there won’t be anything left for them to do.

While responding to the question of how he knows the decision of the UN Human Rights Committee, Dr Shaheed said that the government has no valid response to Nasheed’s complaints. And he said without a calculator one would know that ‘2 plus 2 is 4.’

The UN Human Rights Council and other bodies continuously express their concern over the Maldives diminishing human rights situation.