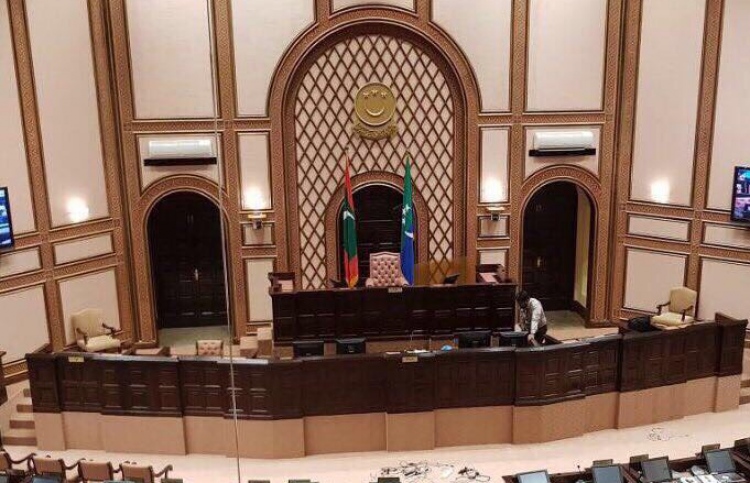 The original Dhivehi article was published on Mihaaru.com website on 9th October 2017.

The wall of MNDF guards used as a protective shield in the Maldives parliament, has now become a real wall. If some found it bewildering to watch the parliament session while MNDF were protecting Speaker of Parliament Abdulla Maseeh, now they are even more likely to get more baffled. Most certainly, Maldivians on social media are left dumbfounded and appalled.

People streamed their concerns over the woodwork done, the clerk and deputy speaker area emptied and speaker’s desk blocked by a wooden wall, to obstruct the oppositions from protesting.

Another Facebook user described it (the wall covering) as ‘the world’s most shameful act.’

Some people’s criticisms turned out more towards mockery. Like, while making reference to the Donald Trump’s Mexico – US wall, some called the parliaments woodwall as the ‘Trump Wall’. The others called it the ‘Wall of Maldives.’

‘We have now erected here is the Wall of Maldives. It is more perfect than the Great Wall of China. It is bigger than the US – Mexico wall,’ commented Hamza Khaleel on Facebook.

The other more concerned, distraught and angry people compared it as the Israeli – Palestine injustice.

‘The Israelis also built a similar wall like that in the land of Palestine people,’ expressed the Facebook user.

After putting the rest (members) in a pit and to conduct parliament sessions will be better than this, said an embarrassed Twitter user. Another said it was a waste of public funds.

However, there are also those who feel that it was a necessary thing. They feel that since members go around heckling and interrupting the parliament sessions, a step like this was acceptable.

Some even lauded the government for the bid to prevent the hecklings of members who believe that Speaker Maseeh violated the parliament proceedings. With confidence and optimism one commented, the government ‘Will do what’s necessary.’

The others went on to brainstorm a way to tackle the wall-of-an-obstacle that has come in between the speaker and the members. Perhaps a video game might offer a solution.

‘The Clash of Clans gamers would know how to get rid of that wall,’ commented a Facebook user.