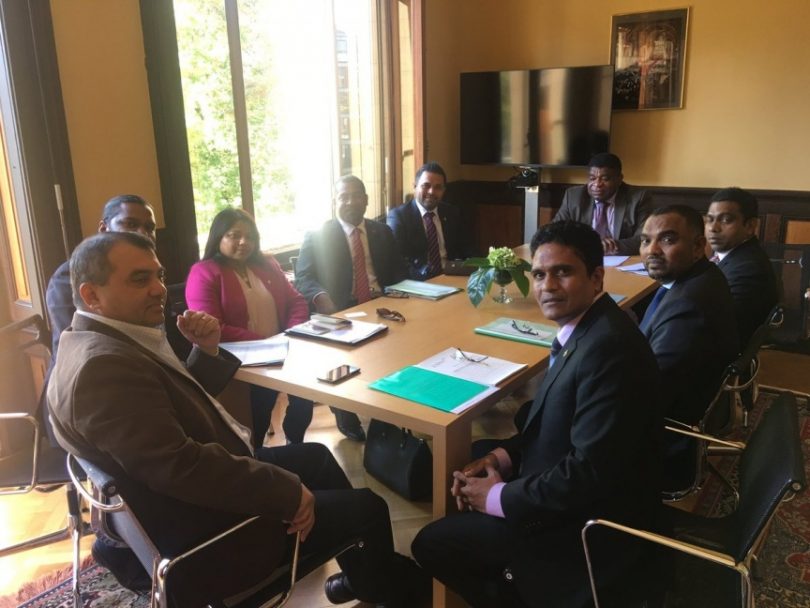 Speaking in an exclusive interview to “Sun” from Geneva, this Saturday, Arif said the PPM delegation, during its meetings discussed human rights in Maldives, the allegations by the opposition that parliamentarians were denied access to the Parliament, and the execution of the death sentence.

Arif said the delegation answered all the questions asked by the agencies and clarified the issues.

He said the Swiss Ambassador to Asia-Pacific had asked for clarification regarding the allegation some parliamentarians were denied access to the Parliament premises.

“The meetings, In Sha Allah, were very fruitful.”

Nihan said the delegates met the High Commissioner as representatives of the people, and that he intently listened to everything they said.

“We are very happy the High Commissioner’s office listened to what we had to say so intently, and showed us the door was open for them to work together with us,” said Nihan.

Nihan said that the delegation, during the meetings, tried to clarify all misconceptions regarding the situation in Maldives.

“We, this delegation, worked on sharing the current situation of Maldives, and clarifying the misinformation spread by the opposition in the international community regarding Maldives,” said Nihan.

He said the main subjects of discussion had been regarding talk of unprecedented deterioration of the political situation in Maldives, talk of lack of freedom for parliamentarians, and talk regarding the execution of the death sentence in Maldives.