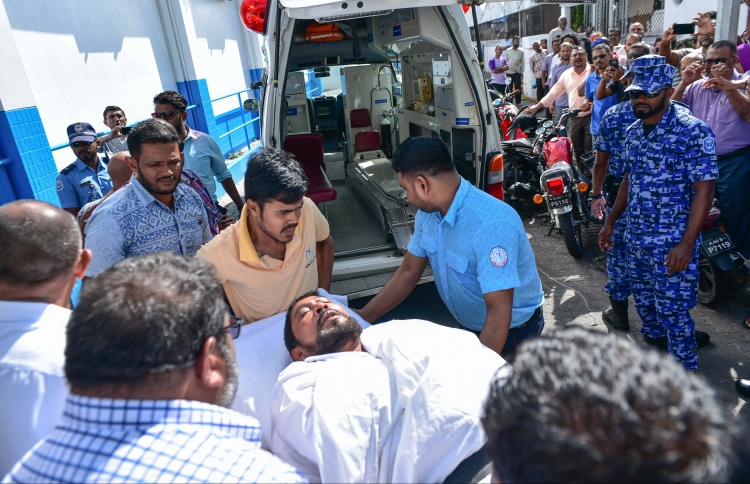 Minister of Home Affairs Azleen Ahmed and Maldivian ambassador to Japan Mohamed Hussain Shareef on Monday met with hospitalised former Maamigili MP Gasim Ibrahim, on behalf of the president, during which the latter made a “special request” for President Abdulla Yameen.

The former MP lost his seat after the Criminal Court on Thursday sentenced the opposition Jumhoory Party (JP) leader to three years and two months of imprisonment over bribery charges.

During his trial held on Thursday evening, Gasim had collapsed in the courtroom in the middle of his hearing, and was rushed to the hospital. He was sentenced in absentia in the early hours of Friday morning.

Doctors who treated him at the state-run Indira Gandhi Memorial Hospital (IGMH) have advised to take him abroad for further treatments immediately. However, he is still being held at IGMH, under the supervision of Maldives Correctional Service (MCS).

JP’s Secretary General Ahmed Sameer had initially said that the president’s representatives visited Gasim on a “courtesy call” and further details on what was discussed were not disclosed.

Meanwhile, the Human Rights Commission of the Maldives (HRCM) earlier on Monday had also visited the local business tycoon.

Sameer said that the HRCM had inquired about the difficulties and problems Gasim’s family were facing due to him being admitted whilst under the supervision of MCS, and when they raised the issues, HRCM was very effective in resolving them.

“One major problem was that it was incredibly difficult for Gasim’s children to access him. But since HRCM intervened, it has gotten easier for his children to see their father. A few other restrictions levied on Gasim have also been lifted now,” Sameer said without going into further details.

However, the biggest challenge faced by Gasim and his allies, according to JP’s secretary general, is making arrangements to send the ex-MP abroad for the treatment that he needs direly.

He said that even HRCM had acknowledged that Gasim needed to be sent abroad as soon as possible, and that it had reassured Gasim’s family that they would do everything within their power to get him the medical attention that he needs.

While the human rights watchdog assured Gasim’s family that he will be taken care of, the commission has not given any official remarks regarding the matter.

Sameer had also met with the lawyers of MCS regarding sending Qasim abroad for medical treatment.

“Even the MCS lawyers agree that they need to take action promptly. But the problem is that the paperwork regarding [Gasim’s] transfer is buried under a pile somewhere on home minister Azleen’s desk. We told MCS lawyers that, if something were to happen to Gasim during this transition time, due to a political reason, they will – regretfully – have to take responsibility,” Sameer said.

However, on Tuesday Minister Azleen revealed that Gasim had a “special request” for President Yameen when he visited the hospitalised opposition leader on Monday.

Speaking to ‘Mihaaru’, Azleen only said that Gasim had asked to confer a message to president Yameen during his visit. When asked whether it was a political message, the minister reluctantly revealed that the nature of the request was not political; but rather something that a person going through a health issue would plea for.

“It was something that any ordinary citizen would ask for from a president,” he said.

Azleen also said that the president wanted to send representatives on his behalf because he wanted to get a better understanding of Gasim’s condition as reports about his health vary.

While Gasim’s spokesperson has claimed that his case-file was “buried somewhere” on the home minister’s desk, Azleen assured that the government is doing “everything within their power” to send Gasim abroad as soon as possible.

He further explained that the delay is caused by all the paperwork that is involved in transferring someone under the supervision of MCS abroad. Also, the approval that is needed from MCS’ board for the transfer has not been obtained yet as the quorum was not met in the board meetings that have been held so far.

However, the minister assured that they are trying to hold another meeting on Tuesday night to get the approval needed to send Gasim abroad.

The former Maamigili MP was arrested on bribery charges for comments he had made late March, ahead of the initial censure motion against the parliament’s speaker Abdulla Maseeh.

However, Qasim is suffering from a heart disease and his heart condition has been growing worse over the months. His hospitalization on Thursday afternoon after he fainted in court is the third time for the lawmaker to be admitted during his trial, and his doctors have released official documents warning that Qasim is in urgent need of a surgery that is unavailable in the Maldives. In the latest document signed by his doctor last Thursday, the lawmaker was urgently referred to be sent abroad for treatment, warning that further delays may exacerbate his condition to the point of life-threatening.