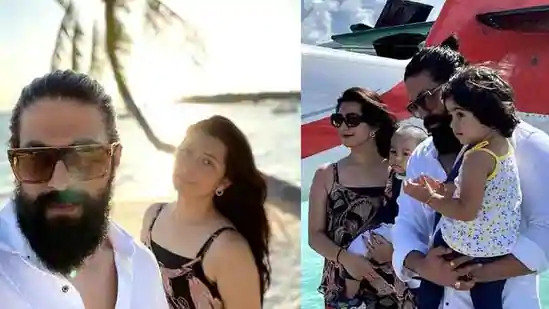 Yash with family in the Maldives.

Yash has flown to the Maldives for an exotic holiday with wife Radhika Pandit and their two kids.

Actor Yash, who recently completed shooting for KGF: Chapter 2, has jetted off to the Maldives on a holiday with his family. He shared pictures from his holiday on his Instagram account and they’ve already gone viral on social media.

After working non-stop for KGF: Chapter 2 over the last few months, Yash has taken a much-deserved break to spend quality time with his wife and children.

“If there was a tropical paradise, then this would be it!! The Maldives. here we come!! @iamradhikapandit #stayinspired #themuraka #youarespecial (sic),” read his Instagram post.

The teaser of KGF: Chapter 2 was released recently and it was extremely well received with over 50 million views and counting. The film is gearing up for release this summer.

Going by the teaser, it is very evident that the makers have pushed the scale to make the project look grander. If the last shot of the teaser is anything to go by, the film won’t disappoint on the action front. The teaser also gives us a glimpse of Sanjay Dutt and Raveena Tandon.

The team recently wrapped up the climax shoot with which the project has completed its shooting. The next few months will be spent on the post-production as the film will be heavy on VFX.

The project marks the southern debut of actor Sanjay Dutt, who plays the lead antagonist, Adheera. The film also stars Raveena Tandon in a crucial role. It is directed by Prashanth Neel.

Talking about Sanjay Dutt’s character and having him on board, Yash had told Hindustan Times: “When we made “KGF: Chapter 1”, we had our own inhibitions and restricted ourselves in some way. But with this kind of success on our side, we are going all out to make the second part. We now know people are keenly looking forward to the second part and we can deliver it without any reservations. We’ve reserved the best for chapter 2.”