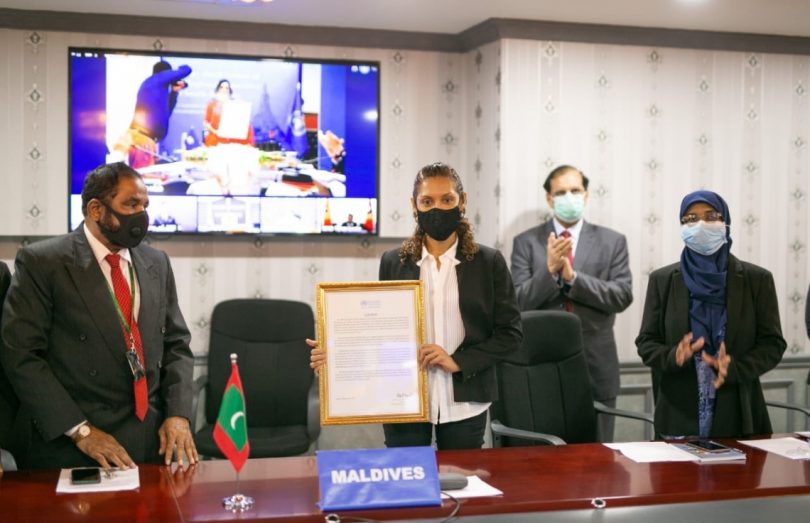 World Health Organization (WHO) on Thursday issued a citation to the Maldives in recognition of the island nation’s successful elimination of Rubella, a contagious viral infection also known as German measles, three years ahead of the regional 2023 target.

The Maldives and Sri Lanka are the first two countries in the South Asian region to eliminate measles and rubella ahead of the 2023 target.

“This commendable achievement was made possible by the strong leadership and commitment of the Government of the Republic of Maldives, sustained collaboration with the World Health Organization and partners, and active support of health-care workers, volunteers and communities at all levels of health services”, read the citation.

The organisation highlighted that the Maldives included the rubella-containing vaccine in the country’s Expanded Programme for Immunization in 2007, noting the multiple mass vaccination campaigns carried out by the government and routine immunisation activities.

WHO South-East Asia declared it an honour to recognise Maldives’ achievement, and hailed the country’s government, in particular, the Ministry of Health and Health Protection Agency for “this remarkable public health success”.

We recognise the hard work of healthcare workers who have made this achievement possible.
👏 👏 👏
We are committed to continue efforts to maintain elimination of measles and rubella.

According to WHO, a country must have no evidence of endemic transmission of measles and rubella viruses for more than three years to be verified as having eliminated these diseases.

The last endemic cases of measles and rubella in the Maldives were reported in 2009 and October 2015 respectively, and in Sri Lanka in May 2016 and March 2017 respectively.

Maldives was officially declared as measles-free by WHO in June 2017. At that time, Maldives and Bhutan become the first two countries to achieve the target of eradicating measles before 2020 from the South Asia region.

However, the island nation recorded a minor outbreak of measles earlier this year, after eight people tested positive for the disease during January.

The government had mobilised a vaccination and awareness programme to help contain the outbreak. Soon after, in early February, the authorities revealed that 6,000 individuals were vaccinated during the immunisation programme and that no more positive cases had been detected.

The member states of WHO South-East Asia Region set the target to eradicate measles and rubella by 2023 in September 2019. Other countries that have successfully eliminated measles are Bhutan, North Korea and Timor-Leste.