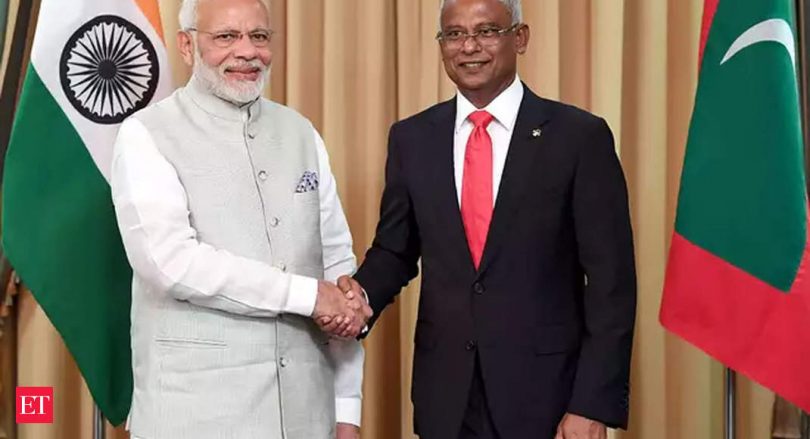 The Republic of Maldives is arguably the most strategically important of India’s neighbours. An island nation in the Indian Ocean with one of the largest exclusive economic zones in the world, it is positioned like a ‘tollgate’ between the western Indian Ocean chokepoints of the Gulf of Aden/Strait of Hormuz and the eastern Indian Ocean chokepoint of the Strait of Malacca on the other. Since the Indian Ocean itself is a key highway for global energy and trade flows, the importance of the Maldives for international sea lanes of communication is vital.

India’s relations with the Maldives, except for a brief interregnum, have been excellent in all aspects: linguistic, cultural, religious and commercial. India was among the first countries to recognise the Maldives in 1965. In 1988, India demonstrated its unconditional commitment to the sovereignty and territorial integrity of Maldives by lending prompt assistance to defeat the attempted overthrow of the then legitimate government. And when the Tsunami struck in 2004 or when the Maldives endured a water crisis in 2014, India was the first responder in terms of humanitarian and disaster relief.

Since the assumption of the office of President by Ibrahim Mohamed Solih in November 2018, relations have been taken to the next level. Prime Minister Narendra Modi attended the inauguration of President Solih and established a personal rapport with the Maldivian leader. President Solih reciprocated in kind when he paid his first overseas visit to India in December 2018. During this visit, India offered the Maldives a financial assistance package of $1.4 billion and 1,000 scholarships over the next five years. PM Modi, after reassuming office in June 2019, again paid a state visit to the Maldives in a clear demonstration of the importance of the country.

India’s policy of ‘Neighbourhood First’ and Maldives’ policy of ‘India First’ seem to be in absolute sync with each other and the broad bilateral ties rest on the foundation of mutual trust, understanding and sensitivity to each other’s concerns.

One of the key areas where India is assisting the Maldives is connectivity and civilian infrastructure. Apart from seven major projects under Indian line of credit (LoC) of $800 million, India has announced another LOC of $400 million and a special grant of $100 million for the Greater Male Connectivity Project, seeking to link Male to three other islands through a series of bridges, causeways and roads. The project will provide a major fillip to the Maldivian economy.

The major turnaround in India’s relations with the Maldives and its elevation to a strategic high is a notable success story in our neighbourhood diplomacy. The following lessons are worth drawing from this exemplary success:

• Personal involvement of the PM on the Indian side and the President on the Maldivian side has been a crucial factor in the success story so far.

• The external affairs ministry deserves credit for speedy implementation and follow-up of projects and commitments made at the highest level.

• Strategic convergence between the two countries was made possible because of the policies of India First and Neighbourhood First.

• Maldives’ own objectives in the Indian Ocean are not very different from our own policy of Security and Growth for All in the Region. India’s strong commitment to being a net maritime security provider in the region can be dovetailed with Maldives own desire for maritime security.

• Thanks to the people-centric projects aided by India such as capacity building, ITEC programmes and the crucial health sector, India is seen by the ordinary people of Maldives as a benevolent and friendly power. The importance of this aspect cannot be overemphasised.

In conclusion, the exemplary bilateral cooperation between India and Maldives could serve as a useful template for developing our ties with other neighbours as part of India’s Neighbourhood First policy.